I first met Baseball Joe Vogel on June 12, 2016, while meeting up with friend and fellow baseball road tripper Dan Davies and his group of traveling friends, who invited me to join them in Pittsburgh. He’s become a good friend and I always meet with him when I’m in Pittsburgh. 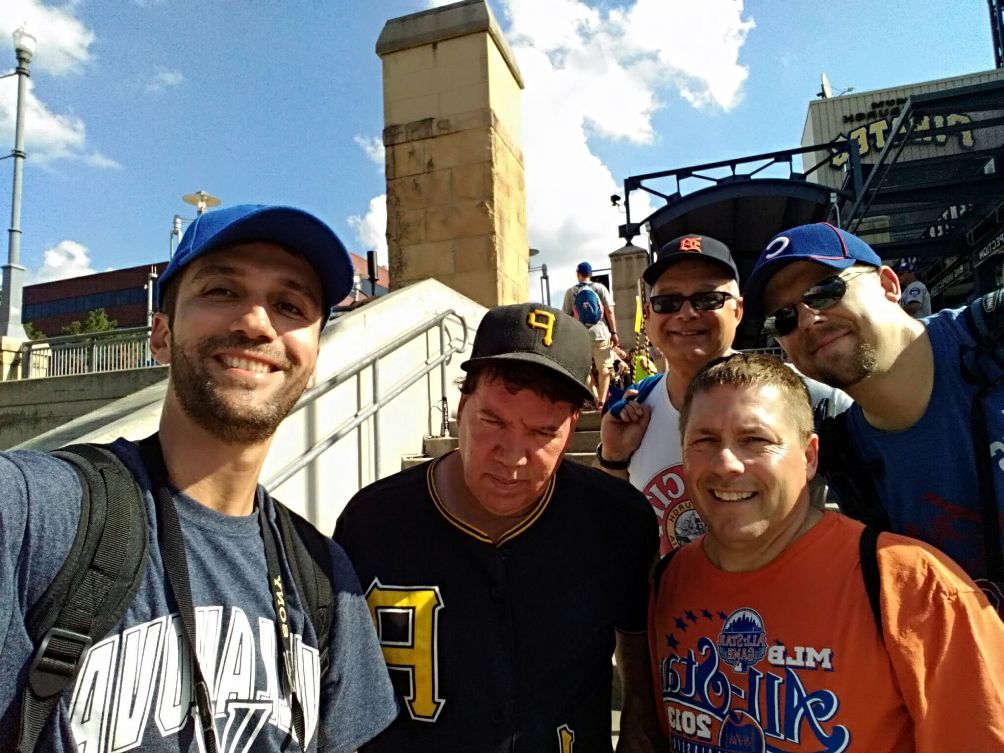 It was a picture-perfect day at stunning PNC Park, as the Pirates prepared to battle the Cardinals in a late afternoon matchup.

On this day, though, baseball isn’t the only thing on the mind of the Bucs faithful.

Sidney Crosby and the Penguins are in San Jose this evening, set to seal the deal on a fourth Stanley Cup for the city. Which they would, a few hours after the ballgame ends. Penguins jerseys, tees and caps can be seen in large numbers for a baseball crowd.

At one point during the game, a young fan brings out a mock, almost-life-size aluminum foil Stanley Cup and parades it proudly around a section in the right field corner. It gets a round of sustained applause from the excited fans sitting in the area.

But despite being a Pittsburgh native from birth, Joe Vogel is having none of this.

Without warning, as if duty calls him, he springs from his chair in the right field cove and disappears into the concourse. Seconds later he can be seen roaming the section where the Cup-carrying fan was. To the great amusement of his buddies in the cove, Vogel spends several minutes determinedly searching for the fan, who by this point is long gone.

The laughter in Vogel’s section grows louder as his determined search continues well beyond the amount of time one would think the situation warranted. Because after several innings of sitting with this character, they know exactly why he is seeking out the proud hockey fan.

It was to shame him. To frown on him. To educate the young lad on priorities.

Because as Baseball Joe Vogel will always let you know, only baseball matters. Every other sport is a waste of time. 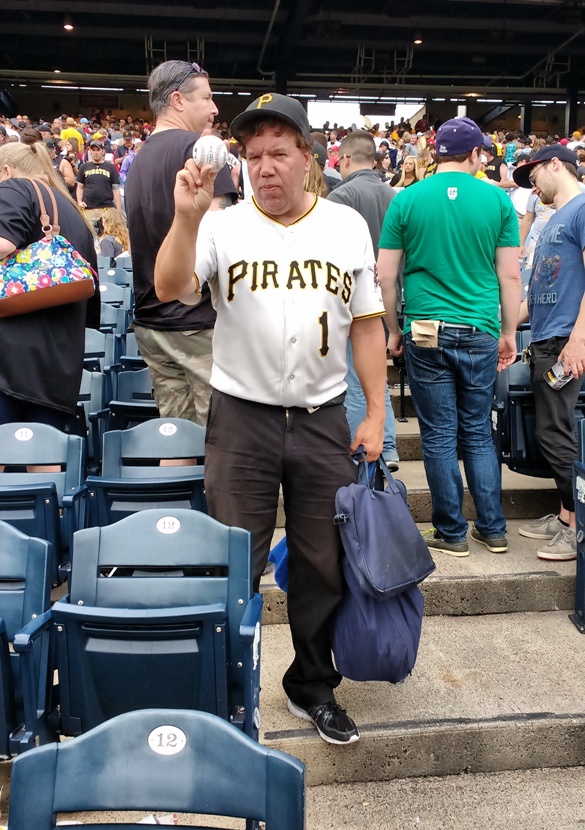 The only fan that can throw a baseball around in a concourse and get away with it.

Baseball Joe is deaf and mute from three debilitating strokes. He communicates through gestures and hand signals, with a small keyboard, or on a folded piece of paper with the alphabet on it.

He lives in an apartment in downtown Pittsburgh, a short walk across the Clemente Bridge from PNC Park. Baseball, Pirates baseball, is his life. It has been since he was a young boy. He proclaims himself the “biggest baseball fan anywhere”, and thus far in my near half century of existence I haven’t met a bigger one…which, if you knew my father, is saying something.

The Pirates know him well. He occasionally plays catch with manager Clint Hurdle and even advises him at times via e-mail. Courtesy of a team that loves his dedication, he has season tickets and attends every game in the covered handicapped section in right field, underneath the right field bleachers. He can’t be in the sun for too long. He may be the only fan in PNC Park who doesn’t care about the picturesque city backdrop.

Sitting with him, it’s almost impossible to pay attention to the game, especially as opposing hitters tee off on Pirates pitching as the Cards would that night. Baseball Joe is every bit as entertaining as the action on the field…constantly having conversations with bystanders in his own way, patiently communicating with his keyboard or well-worn piece of paper when people have difficulty understanding his gestures.

He carries a baseball that he frequently tosses to passing ushers, who nonchalantly toss it back to him, knowing the routine. Throughout the game, other team employees stop to greet him. He constantly collects souvenirs and seems to have a never-ending supply of the large soda cups, one of which he shares with me. 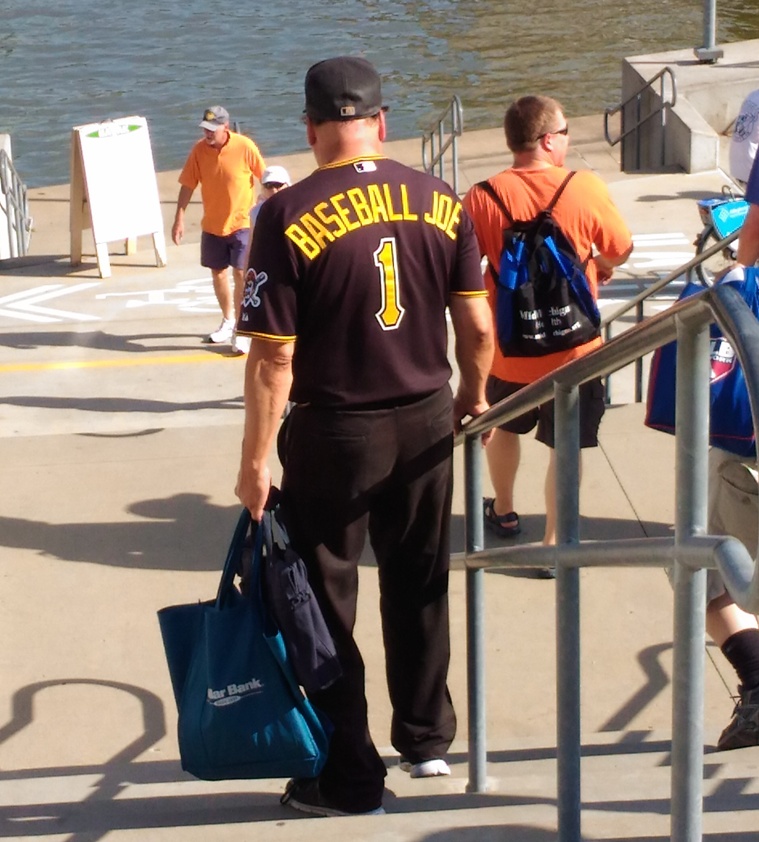 Throughout the evening loud laughter is heard in the section at both his knowledge of baseball and his chastising of fellow fans for their comparatively insufficient reverence for the game.

At one point, he asks me if I like any other sports. Forgetting his disdain for the hockey fan, I tell him I like NASCAR too, and he shakes his head. He pretends to be driving a car, and then frowns at me and does the shame symbol with his fingers. He then holds up a baseball and makes a circular motion with his finger. By this point it’s understood. Baseball, year-round.

All night long, it never stops. With his keypad, he fires baseball trivia questions at his buddies…like “Name two players in the Hall of Fame that have the same first and middle names.” A wiseacre in the group replies, with great bombast as if he’s sure of the answer, “Ken Griffey Senior and Ken Griffey Junior!”

Later Dan, who took Joe along with his group to several ballparks and the Hall of Fame, told me the story of his wiping up the floor with an interactive trivia game at the Hall. If there was a baseball edition of “Jeopardy”, Baseball Joe would be Ken Jennings. 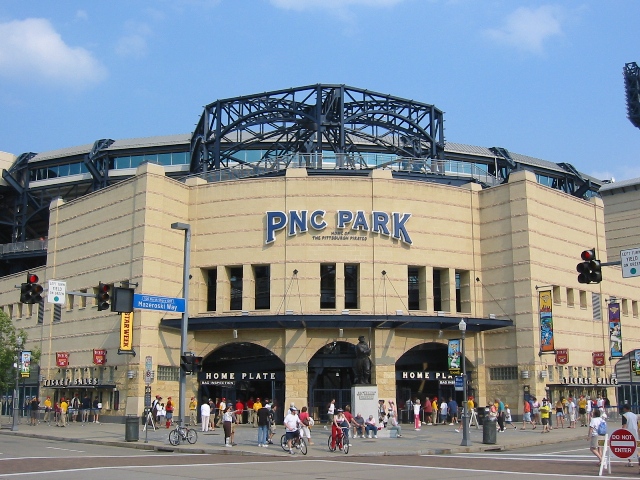 Baseball Joe holds the distinction of being the first fan to ask for my autograph, at least as an author of baseball books.

At the Pirates game, he asked me to send him the PNC Park E-Guide…and to autograph it for him. He also gave me firm instructions…make sure I sign my full name, middle name included, and do it neatly, which I am not accustomed to doing with my usual chicken scratch of a signature. He’s a stickler, this one, especially when it comes to matters baseball.

Joe loved the E-Guide and raved about it to me in an e-mail…a badge of honor…but he also had a few suggestions: elaborate more on seating, include some photos in the whitespace, and maybe talk more about food and such. He is the first fan ever to complain to me that there isn’t enough information in a Ballpark E-Guide.

He has been repeatedly asking me to send him guides for Wrigley and for Busch in St. Louis, should I ever write that one. I will. I’m always happy to have an audience.

Citizens Bank Park from the west.

A few days after the Pittsburgh experience, I met up with Baseball Joe and the group again, this time in Citizens Bank Park in my hometown of Philly. I found them a free parking spot and sat with them in the upper level for the evening. Throughout the evening, Joe kept me entertained, once again more often than the action on the field.

I tell him I am an Orioles fan, and he holds up fingers…first seven and then one. I immediately get it. 1971 World Series. Pirates over the Birds in seven. I was three.

Then he makes a “7” and a “9” with his fingers. 1979. The Pirates, led by Pops Stargell and rallying around the passing of manager Chuck Tanner’s mother, come back from 3-1 to once again beat the O’s in seven games. My response is to hang my head and to pretend to rub tears from my eyes, illustrating the heartbreak of the 11-year-old Orioles fan that year. “I still NEVER dance to ‘We Are Family’”, I inform him.

He nods, understanding. He does the eye rub himself when he brings up the Pirates’ long stretch of down years.

He asks me who my favorite player is, and when I say Cal Ripken Jr., he quickly replies on his keyboard with a stat for me: “Lowest batting average of any player with 3,000 hits”. Sigh.

When I show Joe a picture of my daughter posing with baseball-themed stuffed animals that I’ve brought home for her from my travels, he briefly types on his keyboard and shows me. “You so blessed,” it reads. “Me haves no family.”

I instantly feel both sad for him and guilty about the occasional dissatisfaction I feel with my own life. He’s right. I am so blessed. I not only have two beautiful and healthy kids, I still have time for the only sport that matters. 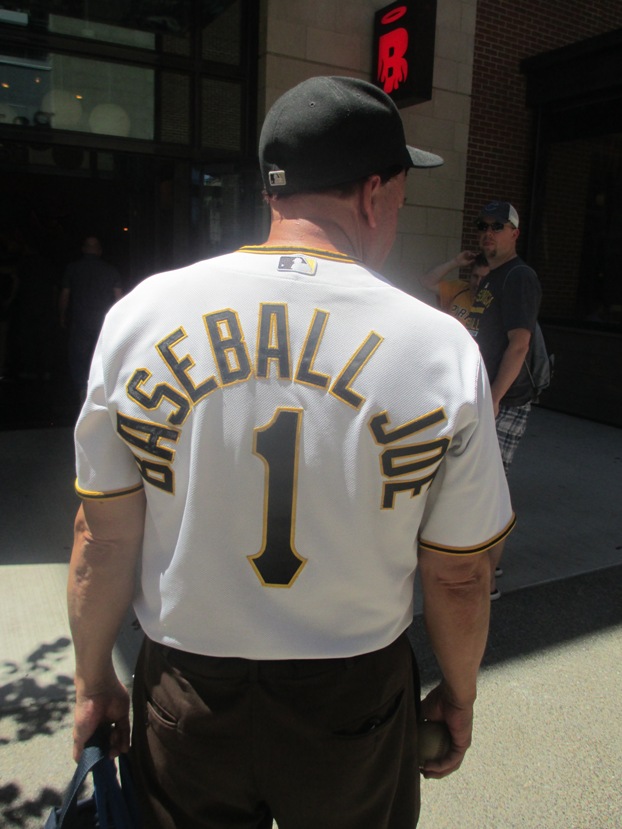 Long after the crowd has filed out of Citizens Bank Park that night, Baseball Joe manages to make a few ushers uncomfortable with his refusal to leave the seating bowl before collecting as many souvenir cups as he can. You can see clear agitation growing in the ushers’ eyes as they anticipate a confrontation. Joe seems oblivious to the approaching ballpark police, but he exits the seating bowl at what seems the exact moment before the ushers turn snooty. He’s a pro at this.

Back at the hotel where the traveling fans are staying, Baseball Joe and I pose for a picture, and he surprises me with a huge bear hug. Apparently I’ve made a good impression. I’m grateful that he’s not upset with me for showing him family photos.

Joe and I e-mail each other frequently. In his e-mails to me the subject line is almost always “Baseball 24 7 366”—making sure he’s covered in leap years. His e-mails are usually brief but always thoughtful…wishing my family a great holiday season, asking me to send along more E-Guides when I can, and sharing his thoughts on the Pirates’ fortunes. Shortly after the Pirates failed to make the playoffs in 2016, he sent me an e-mail with the words “Pirates eliminated – me cry” in it. For 33 years and counting, this Orioles fan has known the feeling.

I’m always grateful to hear from him. Because whenever I reflect on it, he’s right. Other sports are a waste of time.

And Baseball Joe knows as well as anyone that our time is too valuable to waste.