Mrs. Wildwoods Guy is afflicted with celiac disease, which makes eating out a tricky proposition anywhere. And nowhere is this more evident than in our favorite vacation spot. Wildwood is not littered with restaurant chains that need the PR of offering a gluten-free menu, for which I am still thankful. 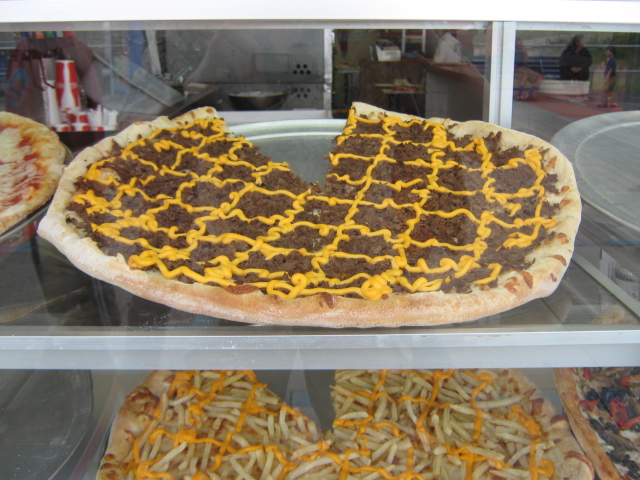 But on the boardwalk it’s tough—dozens of mom-and-pop pizza shops with delicious looking pizzas in the window, many of whom don’t even understand what gluten is. There’s also fried foods galore—who thought of the idea of fried Oreos?—but if anything breaded is cooked in the same vat as the fries, my wife can’t eat it.

So out of respect for my wife, I don’t eat pizza when we’re in Wildwood (sigh). For boardwalk eats I try to get something she wouldn’t like anyway, and thank

fully with her undiscriminating palate that list is pretty large. We usually stay in hotels that have kitchenettes and grills so we can do our own cooking, and that isn’t a bad thing and saves some money.

But anyway, as a public service to celiacs, I’m going to share where we have had success eating gluten-free items in the Wildwoods. Hopefully this will be of help to you celiacs out there.

– Alumni Grill – The Alumni has a college sub shop motif about it, even though Wildwood isn’t what one would call a college town. They have a good variety of sandwiches and wraps, and while they don’t have gluten-free breads they do have some interesting salads and a selection of appetizers that are all gluten-free.

Their fries are also gluten-free. It’s not five-star dining, but their food is certainly good and price-wise very reasonable.

– Westy’s Irish Pub – I like going to Westy’s, because they can handle gluten-free items and my wife doesn’t mind my eating their outstanding French onion soup. Westy’s has indoor and outdoor dining, both of which excel in atmosphere; it’s like eating on a boardwalk outside and you have a great view of the northern coast of North Wildwood. And their food is very good, great chicken cheesesteak sandwiches and good salads among other things. We haven’t yet had a bad meal there.

– Juan Pablo’s Margarita Bar – Juan Pablo’s is the best Mexican food we’ve had in Wildwood thus far, even though there isn’t much competition. Generally my wife can order almost anything; the tacos and chips are made of corn and not flour so she’s okay with that. The rice and beans I believe are also gluten-free, so with the chips and the portions there’s no question the wife can have a filling meal if she wants. Juan Pablo’s is on the pricey side, but their food—including their burger—is excellent, and it’s another place where we’ve always had good luck. 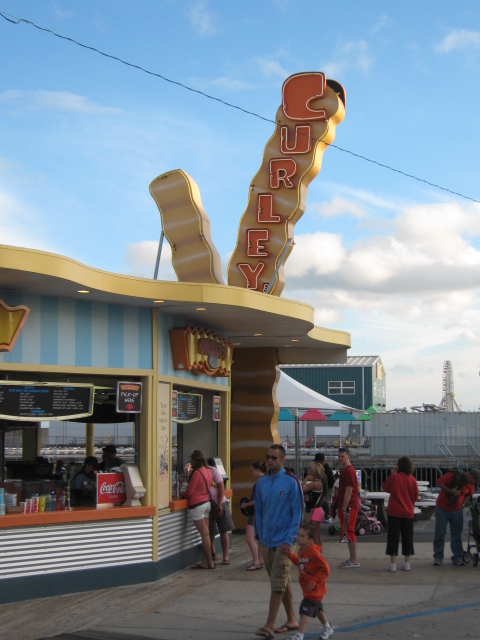 – Curley’s Fries – thankfully the folks that make the best fries in the Wildwoods don’t cook anything else in their oil vats, so my wife can munch on them with impunity. This is a life-saver, because there isn’t much else she can have on the boardwalk, but Curley’s are really all one needs anyway. I’ve written about Curley’s in another piece, so you can learn more there when I publish that one!

– Hassles – Hassles is an ice cream joint in North Wildwood with sundaes named for Sesame Street characters. The kid-sized sundaes are more than big enough for us—and my wife usually orders the Kermit The Frog, a bowl of mint chocolate chip with chocolate sauce and whipped cream. Since mint chocolate chip is her favorite flavor anyway, this works out well for us after an evening on the boards.

– Maui’s Dog House – OK, we haven’t tried this one yet but I’m told that they have gluten-free items even though their online menu doesn’t reflect that. Will update when the wife and I try it.

If you’re a celiac-afflicted type that is vacationing in Wildwood, it might not be a bad idea to bring gluten-free buns and/or ice cream cones with you—places like Stewart’s on the boardwalk will sell you a gluten-free dog without the bun and most ice cream shops will gladly fill a cone that you give them.

I’ll update this as I come up with more items, and if you’ve got anything to share with us on the subject, by all means pass it on…we could use some new options ourselves!

Comments Off on Going Gluten-Free in Wildwood