Andrew Einstein is one of our nation’s true heroes, yet he was driven to the brink of suicide resulting from a head injury and lost sense of meaning. JerseyMan sent me to interview him as he told me what real strength was to him. You can read the article on JerseyMan’s website here, or view the PDF of the article here. 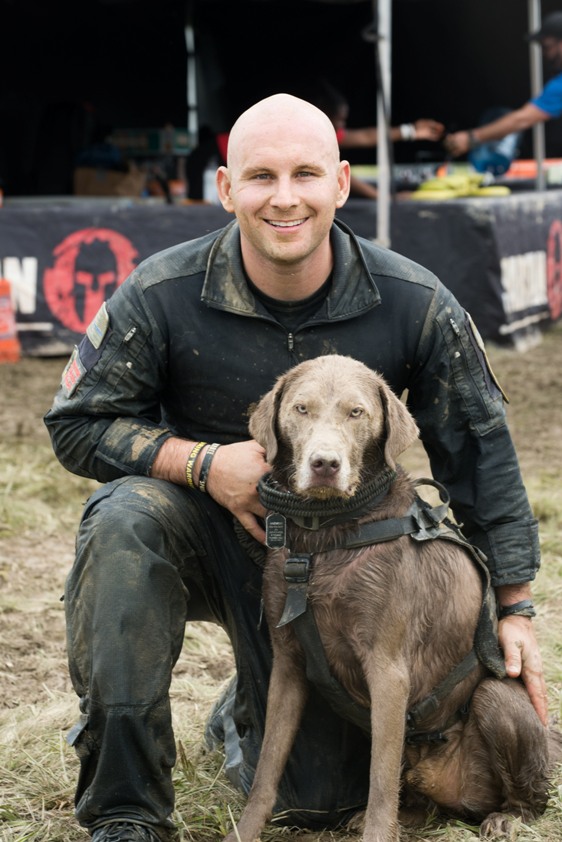 Camden County Police Officer and U.S. Marine Sergeant Andrew Einstein speaks openly about being on the brink of suicide, pulling himself out, and living a life with purpose again.

On August 5, 2011, in the Sangin Valley region of Afghanistan, Sergeant Andrew Einstein of the U.S. Marine Corps sustained a brain injury from a grenade attack.

He didn’t think it was a big deal at the time.

“Kids would throw rocks at patrols and stuff to mess with us,” Einstein says. “I remember looking down and going, it’s just a rock. I saw there was an Afghan soldier, and his eyes were just like…I looked back down and said, oh, that’s not a rock. As I went and turned to get away from it, I got a couple of steps and it went off.

“I remember grabbing my ear, my ear hurt so much. I yelled, I fell into one of the rooms. I crawled out and that same Afghan soldier, he was wearing a white shirt, he fell to where I was and his white shirt was red.

“I remember being really confused. I said, why is his white shirt red? He obviously had received some shrapnel, and I put a tourniquet on one arm and then I went to put a tourniquet on another arm. They took care of him, and I sat back and lit a cigarette.”

He wasn’t bleeding, he didn’t lose any limbs, and he had no bullet holes. Just migraines. To Einstein, it wasn’t a “real” war wound…especially happening on the same day that fellow Marine Daniel Gurr was killed.

He was, he knew, ready to get back to the fight.

A country that values freedom never has enough people like Andrew Einstein wearing military uniforms. But as it turned out, the injury was a big deal. Less than a year later, it was a contributing factor in his decision to end his life. 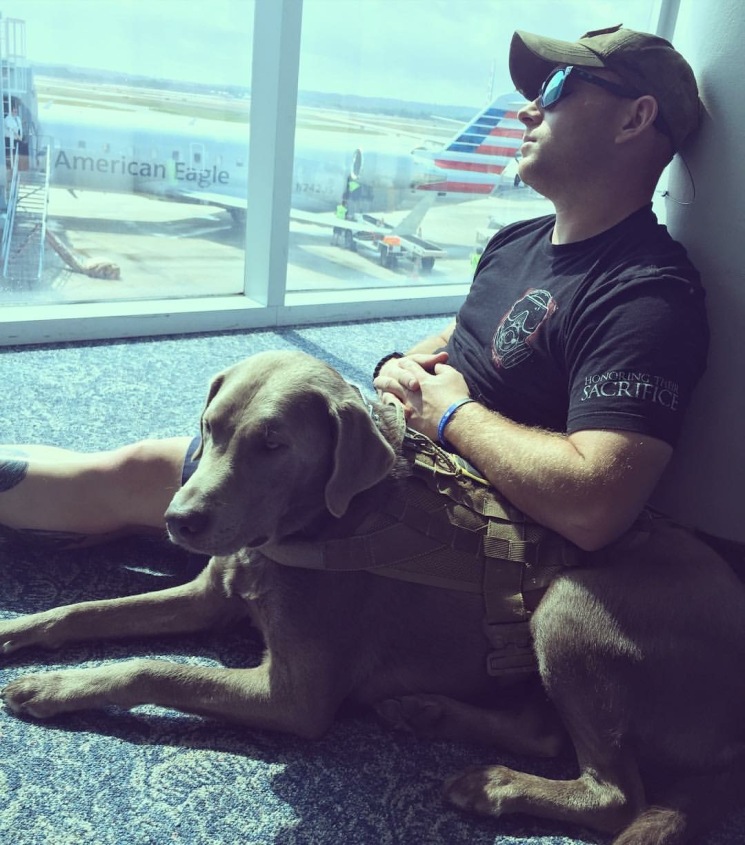 Einstein with Gunner, keeping him in the fight. (photo courtesy of Andrew Einstein)

That, and a lost sense of meaning back home.

“Coming home feels great,” Einstein says. “Then you realize that life went on, and you’ve got to figure out how to get back into your old life. And then comes a time, at least for me, where I said, I want to go back. I need that responsibility and that purpose that I had over there.

“I know the head injury really caused a lot of issues. The biggest issue was the hearing loss and then the memory issue. I was afraid that if I got help, they would take my badge and gun and say, sorry, you can’t be a cop anymore. I’ve been a cop since I was 18. That’s all I know. And I love being a cop. Aside from being a Marine, this is my life.”

As Einstein increasingly saw it, it was a no-win. Fight your losing battles alone or give up the responsibility. As time went on, the stress of what he perceived to be a meaningless life continued to mount.

“I wrote letters to my family. I’ll never forget what I wrote to my youngest sister. I apologized. Because up until that point, she looked at me as this hero. I was her brother, a police officer, a Marine who went over and fought for our country. I said, I’m sorry for lying and making you think I was so much stronger than I actually was, and I’m not a hero. I’ll never forget writing that because those words were the hardest.

“I put the bottle of pills next to my bed. I went out and drank so much that my friends plopped me on the couch. No one knew that 15 feet into the bedroom there was a bottle of pills that I’m planning to kill myself with. I remember waking up the next day, and I was disgusted. I couldn’t even kill myself.”

The date Einstein picked to be his last was fortuitous. He wanted the new dog he had agreed to pick up the following morning to have a loving home, and not be his family’s responsibility. After failing his suicide attempt, he went to pick up the dog. 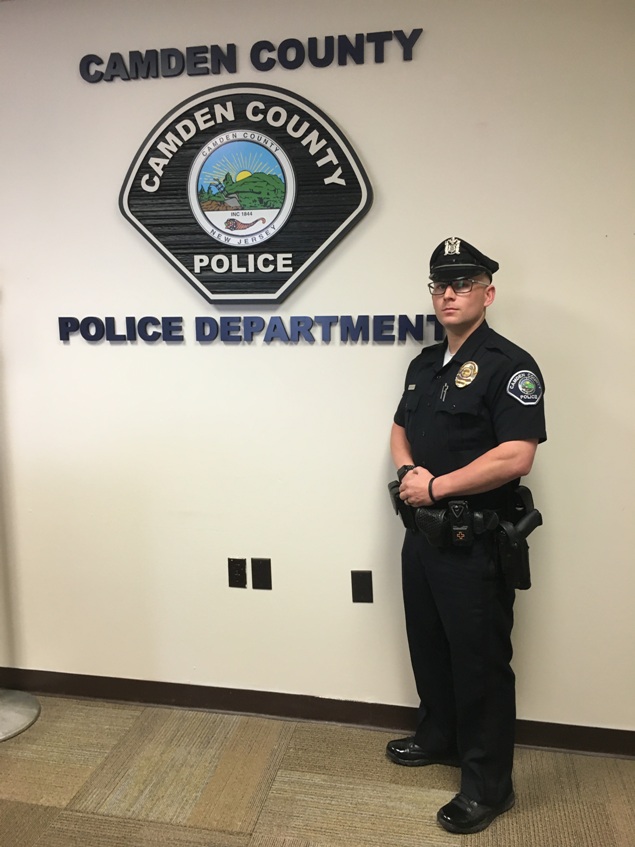 Officer Andrew Einstein at the office.

It turned out that Gunner, his new Silver Labrador, didn’t need a loving home. He needed a purpose too.

“As soon as I picked the dog up, I said, ‘I can’t kill myself, because I’ve got to be there for this dog now.’ All of a sudden I had responsibility again. Even when I was still doing the things I was doing, he was there for me. He didn’t judge, he didn’t care; he loved me. He would lay right on me.”

Einstein gives Gunner credit for saving his life. But he soon caught another break when his chief at the Riverton Police Department, John Shaw, could see he wasn’t well.

“He said, I don’t want you to lose your job, and I want to help you. I said, well, if he’s reaching his neck out for me, who am I not to try and get better.

“I went to doctors, I started going to groups and talking about the issues. My dog and I went into training, so he could become a service dog for me. It was definitely two steps forward, one step back, but each step, it got brighter and brighter. It took time, but we just started getting better and life became better.

“I’m telling you this is strength…raising your hand and saying, ‘I am not okay. I need help.’ One of my biggest things that I speak to now is with the first responder community, when there’s bosses or administrators to understand how or what to do if they have one of their personnel go: ‘I’m not okay.’

“However bad it is in your life,” he adds, “I can’t tell you when it’s going to get better. Hopefully it’s the next day. In reality, it’s not going to be the next day, or the day after that. But if you fight to get better, I promise you at some point, it will get better.

“Live to that Tuesday. Because you know each second Tuesday of the month, you’re going to have that hour of peace. No matter how bad your life gets in between, live for that Tuesday. And then live again for the next Tuesday.

“If you only have that, live for that Tuesday.” 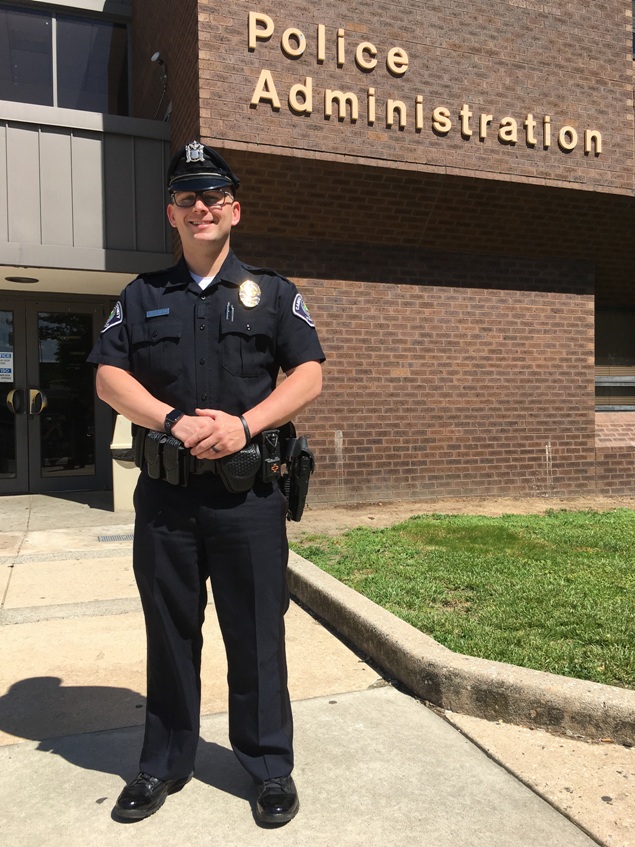 Serving the community, with his own experience.

Andrew Einstein is no longer surviving until Tuesday. He is now an officer in the Camden County Police Department, where he uses war and post-war experience to break trust barriers with city residents.

“In this city, we have people in crisis every day, and these people have lived hard lives. I have to break the barrier, the same barriers I had to break in Afghanistan, to show them, look, I know I can’t relate to your life. But let me in, open the door a little bit, let me show you that I’m here to help.

“We try to de-escalate the situation as quickly as possible, and when someone’s in that moment, I can say, hey, hold on. I’ve been there. Guess what, May 5th, 2012, I was where you were.”

“I love getting the bad guy off the street. But I also love talking to the person in crisis or the person who just wants to talk. Dealing with the people here, it’s not all about busting the bad guys. Sometimes it is about throwing the football with the kid on the block or playing basketball. It’s showing the people that you serve, that you’re a person.

“I don’t say being suicidal helps you become a better person in the long run. It’s you take what life dishes at you and you learn from it.

“What I’ve dealt with in life, I’ve been able to use to mold into a better life.”

Today, the city of Camden has Officer Einstein and Gunner to thank too.