JerseyMan sent me to interview Steve Kehler, the owner of Tricked Out Custom Cycles, for the October 2015 issue. Steve is an affable, funny guy, and it was an enjoyable interview. And he and his team do some truly badass motorcycle artwork. You can view the PDF of the magazine article here. 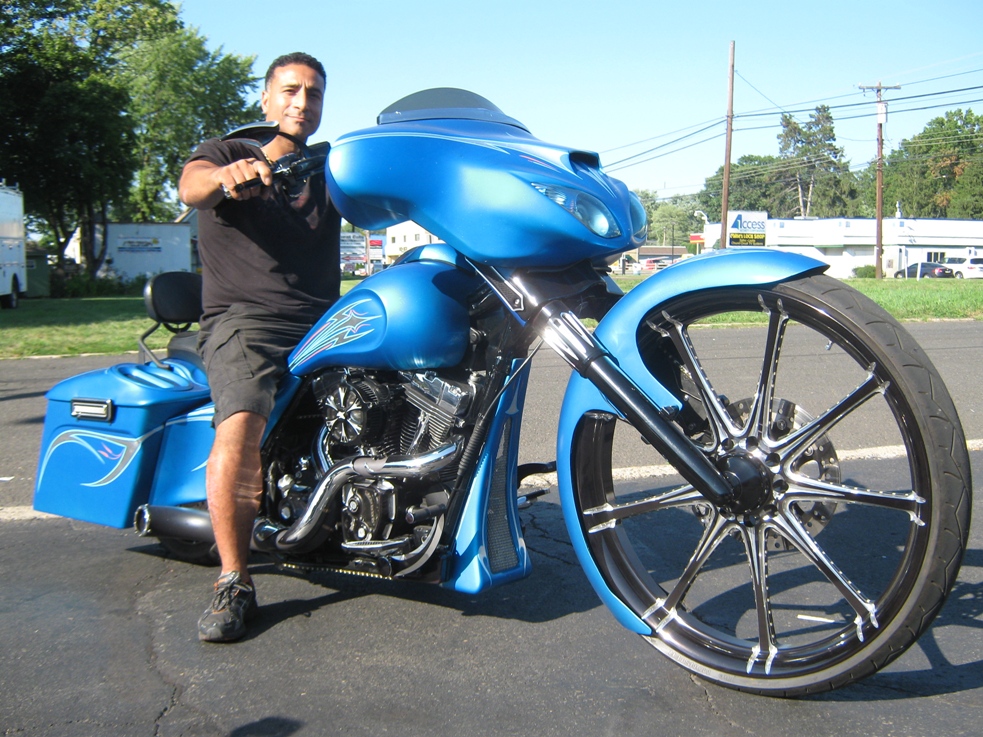 Steve Kehler accepts reality, even when it’s not reality.

The owner of Tricked Out Custom Cycles in Warminster, PA has enough of a reputation for building and customizing motorcycles that in 2007 he was featured on ESPN2’s “Metric Revolution: Motorcycle Build Off”, a reality show competition.

Kehler’s entry in the contest…the stunning Egyptian-themed “King Kawasaki” that is featured on the front page of Tricked Out’s website…took him four months to build. King Kawasaki took third place in the competition.

Which, as Kehler learned, was about the best he was going to do.

“I was under the impression it was gonna be ‘let the best man win’. The reality was brought to my attention very soon after the filming. I came in third on the sport bike side, only to find out that the first two people didn’t even build their bikes.

“They had us filming in Red Rock Canyon. We were going up and down the same mile, changing camera angles, splashing water on our face. It was all propped, all fake. The builds weren’t, but when you find out other people didn’t do their builds, it was like, what kind of a competition are you doing?

“It by no means depicted what reality was behind the scenes. I bet if you talk to every one of those builders, they would all say the same thing. Some of them put in their whole heart and soul…and finances…to impress everybody, and came up shorthanded. I was told that whoever brought the most sponsorships was gonna win the show.”

Sour grapes? Not at all. Kehler is, after all, an entrepreneur. And being featured in a “reality” show competition is great publicity for a business.

“Listen, it’s entertaining,” he says. “The first thing they will tell you when you get involved in the TV show is, this is entertainment. It’s about ratings and if you don’t like it, don’t be involved in it. At the end of the day, being on TV, being in magazines, being in any type of media publication is great advertising. I’ll take it all.

“I usually tell people I let my work speak for itself, if you like what I do and you would love for me to do something for you, I’m all ears. That’s reality.

“We don’t have to film it!” he says with a hearty laugh. 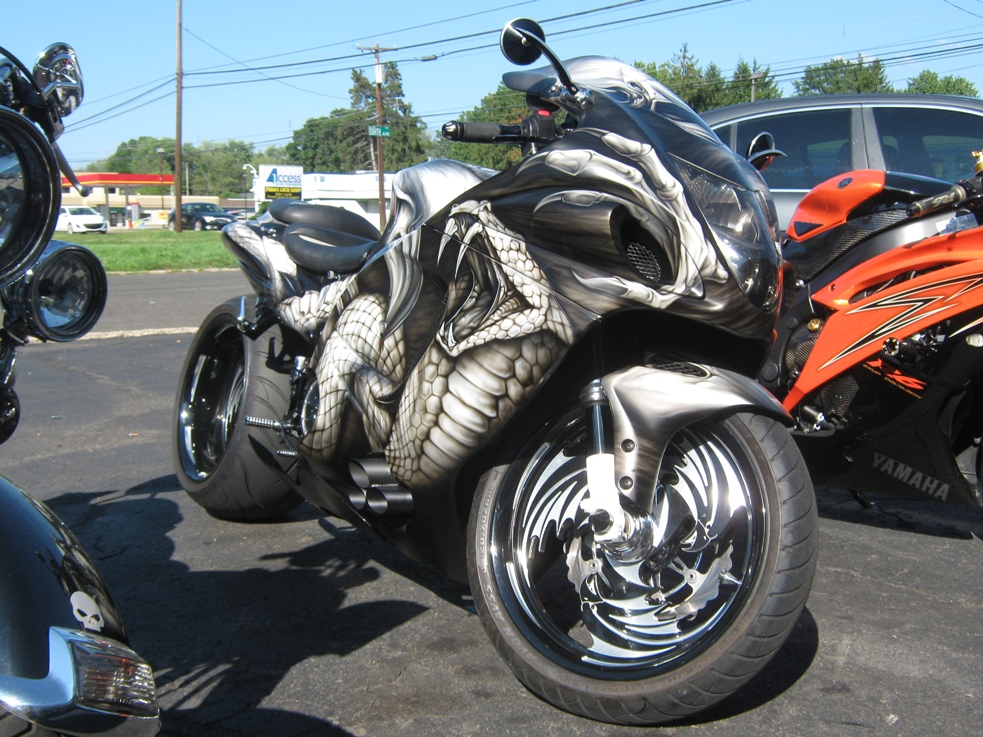 An attention-getting piece of motorcycle artwork.

Kehler laughs a lot these days. He is a cheerful, likable sort, clearly content in his chosen profession. To listen to his story, it’s as if he were born to customize bikes. Especially when his outspoken personality clashed with car dealerships, where he was employed as a mechanic and service writer.

“I’ve always had a passion for motorcycles, and when I was younger I was building bikes out of my garage while working at the dealerships. It turned into a point that, even in management, I was making more money out of my garage than I was in my full time job.

“Everyone has that persona about car dealerships…‘if you take your car to the dealership, you’re gonna get ripped off’…I wouldn’t say it’s ripping off, but the way they force you to make sales, to make your quota, to make your commission, you’re almost forced into overselling. If you need new wiper blades, they’re gonna sell you the wiper motor, the whole nine yards.

“That’s the kind of thing they made you do. I wanted no part of that. So I was the one questioning, why are you doing this? Why won’t you treat everyone like family? When I started making more money out of my garage, that’s how I wanted my business to be. Treat everybody like they’re family. Like we’re all on the same fight, which is just to keep your automobile or whatever up and running.”

His timing opening up his own shop, as it turned out, was perfect. “When I first started the business, the custom world was empty. There was really nobody at that time doing anything significant in sport bikes. Everybody was doing Harleys, I was strictly doing sport bikes and doing stuff that people never thought of.

“So I kind of erupted onto the scene, and a lot of companies and manufacturers really paid notice. It started out with sport bikes, and now the Harley and Metric Cruiser world is really blown away by what we’ve done. So we’ve opened our doors to that market. It’s really great to be able to transfer, like going from a smart car to a four-by-four truck. You’ve got a big range in between!” 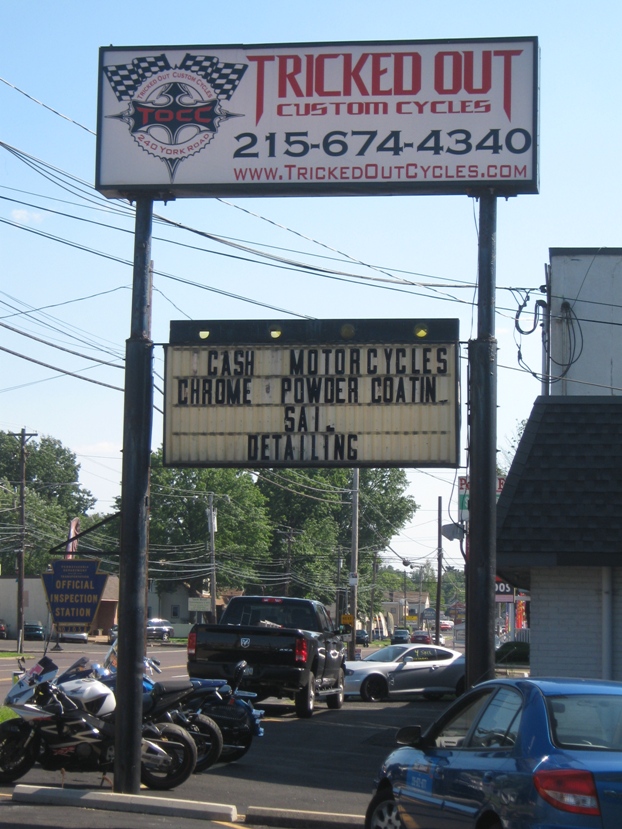 The Warminster shop, with its artwork outside.

Tricked Out Custom Cycles is today a full motorcycle service and repair shop. Parts sales, state inspections, and insurance estimates are among its services. But obviously, given the name on the shingle, they are best known for giving bikes a complete facelift…from powder coating and chrome plating to airbrushing and artwork, including on helmets. On a sunny day, any visitor to the shop can view over a dozen dazzling examples of motorcycle artistry.

“The biggest thing that sticks is our paint work,” Kehler points out. “That’s the first thing that people see and the last thing that they’re gonna remember about a bike.”

And the owner confidently states that what separates Tricked Out from the competition is the ability to do it all.

“We add a unique touch to it, because of our in-house coordinating with customers as far as what they’re interested in, and bringing that concept into reality. Which is very hard for a lot of shops, because they’ll outsource so many things. We can take that bike from start to finish, from the front of the shop to the back of the shop, and have the bike come out completely transformed.

“We do use a lot of parts suppliers, but it’s really how you coordinate and put those things together. It’s like a recipe – you put a couple different ingredients in and it tastes completely different. So we try to put all the right stuff together.

“Some shops try to bite off more than they can chew, and fall short on all areas. We complete what we do 100% and what we can’t do 100%, we’re gonna point you to the person who can. The motorcycle community is pretty tight-knit, and if there’s something you don’t specialize in, you know someone that does and you can get them going in the right direction.” 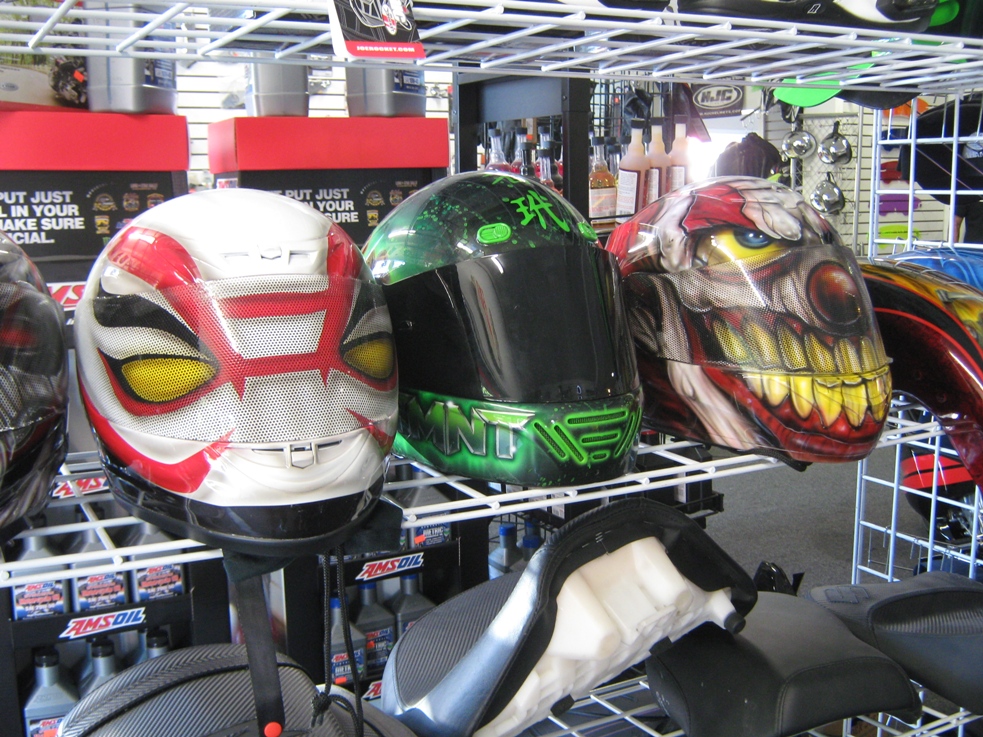 They do helmets too. And quite well.

After fifteen years of treating their customers like family, Tricked Out no longer operates out of Kehler’s garage. He and his crew have enjoyed enough success to expand into the 9,000-square foot facility in the suburbs—because “taxes are cheaper in the suburbs”—Kehler asserts as if it doesn’t need to be said. Business is steady, he would say…part of his job is reading approximately 300 e-mails a day. He has no plans for expansion; his focus is to become better, not bigger.

“I’m not looking to franchise out or anything. We are growing our art department; trying to venture out in a few different areas. But in any business, you have to evolve, and you have to stay on the edge, because what was popular five years ago isn’t popular now. In the custom world, you’ve gotta constantly be on your toes.

“My whole passion is to build. Once the build’s over I don’t go, oh, this is my masterpiece, because instead of adding more bikes to my collection…I have quite a bit of a collection…I’ve focused on the last couple years on doing what my customer’s masterpiece is.

“Expanding is difficult, because it’s not like you’re going to play the same song over and over. It takes a lot of open-minded people and they’re hard to come by, the ones that get it, and the ones that stay for you a while and keep getting it.” 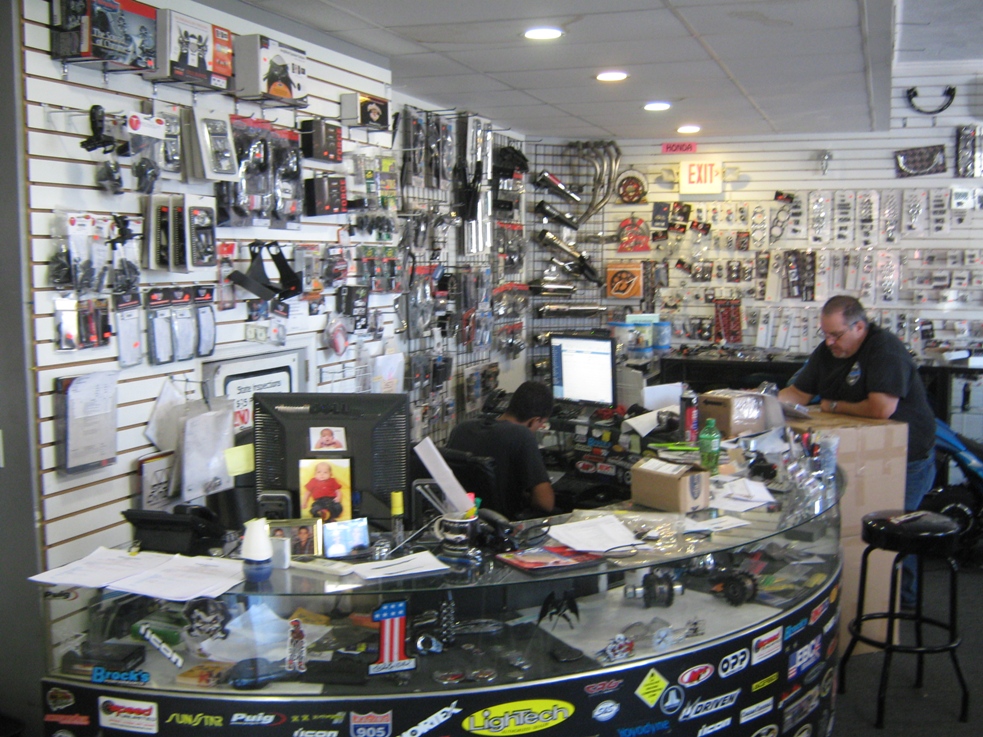 The shop, with everything your bike needs.

So could Tricked Out be a subject of its own reality show, like Orange County Choppers?

“Oh, I think we absolutely could, but my show wouldn’t have to be propped. We are a very interesting group of guys here, we have fun.

“And people don’t want to be uptight. They want to feel comfortable, they want to feel relaxed, and they want to joke around. Being a motorcyclist, and being around peers, my personality kind of fits the bill. I don’t sugarcoat a damn thing. I give people bad news like it’s the best news I could give them. Because I just let it out. And people respect me for that.

“I’m not gonna fake a new bike every week that took 500 hours and we got it done overnight, that’s just unrealistic. Real builders laugh at those shows.

“Fame to me is a healthy family and a happy family. And that’s what my focus is. All of my employees, we’re all family men here. We’re not trying to be famous, we’re trying to provide, and we’re trying to enjoy what we do.

And constantly getting better at it, I think should be everybody’s goal.”

Posted in Entrepreneur Stories, JerseyMan | Comments Off on Accessorized – Tricked Out Custom Cycles