One of the nicer things about a vacation in Wildwood is the potential for exercise that is actually enjoyable…walking or running on the boardwalk or beach, swimming or boogie boarding in the ocean, or riding bicycles on the lengthy Wildwood boardwalk in the morning. Not that stupid exercise that we force ourselves through at the gym full of people that seem to live there. 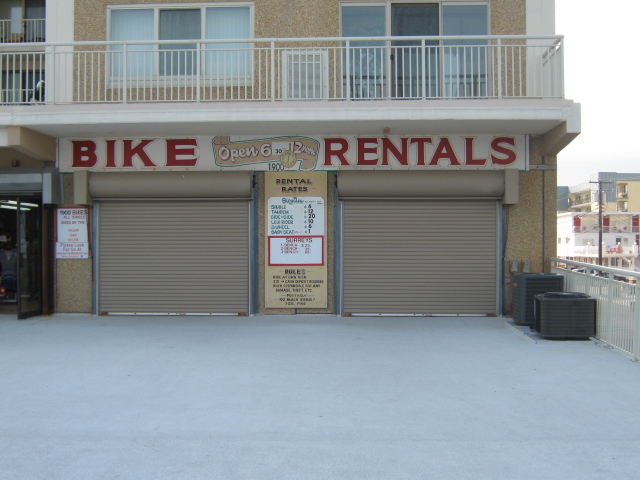 This is the shop in front of the 1900 building, one of the better ones on the Wildwood boards.

Throughout the Wildwood boardwalk, but mostly at the northern and southern ends, there are small shops that rent bicycles to vacationing riders in the morning. Riding a bike on the boardwalk is permitted until 11:00 AM most mornings, and most bike rental shops open at 6:00 AM. Bicycles cost in the range of $6-7 per hour, with surrey bikes going for quite a bit more, usually around $25 per hour.

Usually the family takes an hour. Especially with four of us now, since the surrey bicycles are much more expensive. An hour is usually plenty, so try that first before you go for more.

I’ve found that I can start at the north end of the boardwalk, ride all the way to the southern end, and then ride on the bicycle path in front of the motels in Wildwood Crest to the Admiral Motel—a beautiful part of town to be in early in the morning—and make it back with a few minutes to spare. Or I can head in the opposite direction, through North Wildwood where most folks are walking their dogs. If I hustle, I can do both. 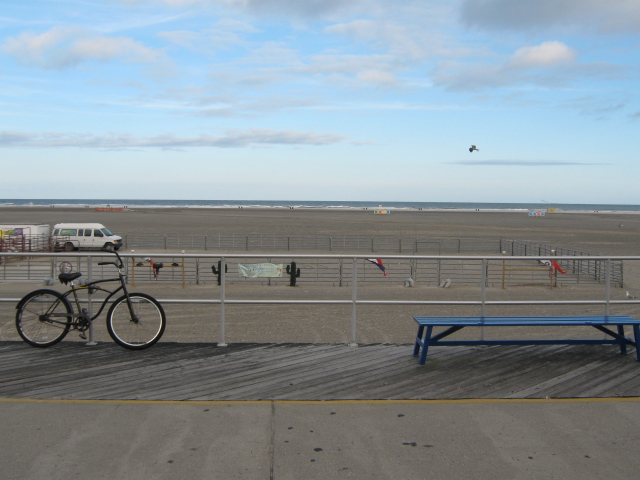 Take a break. It’s the beach.

Early in the morning, the earlier the better, the Wildwood boardwalk has a whole different air about it. Most of the arcades, piers, prize booths and pizza joints are closed, and the entertainment area that just hours before was relentlessly assaulting your senses is peaceful and inviting, with the sound of the waves not far away. People are riding, walking or jogging, and there’s actually room to get around without the crowds and the tram car constantly making their presence known. The most prominent sound of all is the echo of loose boards rattling from the weight of bicycles.

You get a nice overview of all of the stores and eateries on the boardwalk without wearing yourself out walking. There are a few places with coffee and breakfast sandwiches too (although not premium coffee so much). The boardwalk does start to get busier and tougher to navigate around 9:30 or so, so it’s good to get out there earlier if you can. 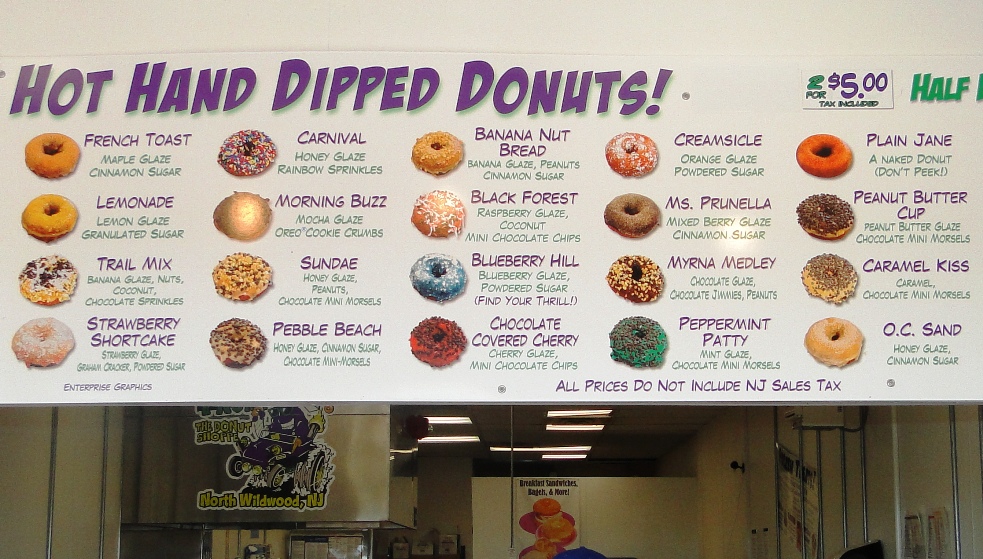 “I’ll take one of everything please.”

And of course, you can stop at Fractured Prune for the most amazing donuts in the Wildwoods. Go ahead, you’ll be bicycling it off.

You don’t have to stay on the boardwalk of course. Wildwood Crest in particular is a perfectly nice and quiet atmosphere to two-wheel around, and there are plenty of bicycle lanes along the beach front to make things safer. As you get further from the boardwalk, it gets morning quiet and beautifully peaceful, and you can explore the other side of the island, which has a nice little bay of its own. 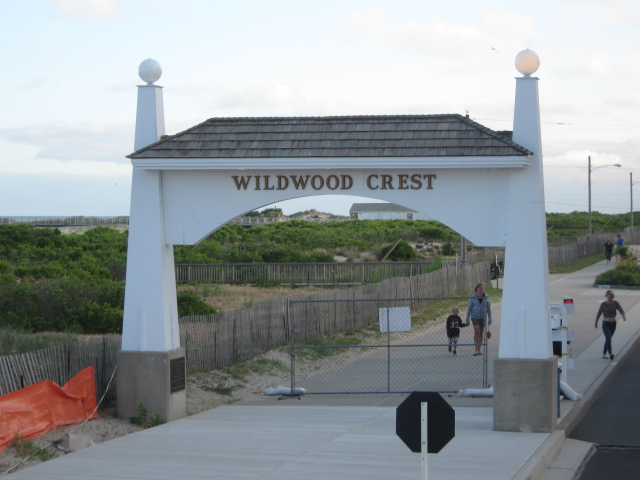 Usually they don’t have the fence there. Don’t sweat that.

The only caution I would mention is to be aware of the breeze and which direction it’s flowing.

I remember renting a bicycle in Long Beach Island many years ago. We were staying in Barnegat Light, in the northern part of the large island, and I was listening to a Beatles compilation cassette I had made.

I figured I would ride as far as I could while one side played, and then turn back for the second side. I made it as far as Beach Haven, the southernmost part of the island, and then learned that the wind had been blowing at my back the whole time. Oops. The ride back took twice as long, and I was sick of the Beatles by the middle of it.

So if you’re intent on only paying for an hour, be certain you can move in the other direction just as fast. 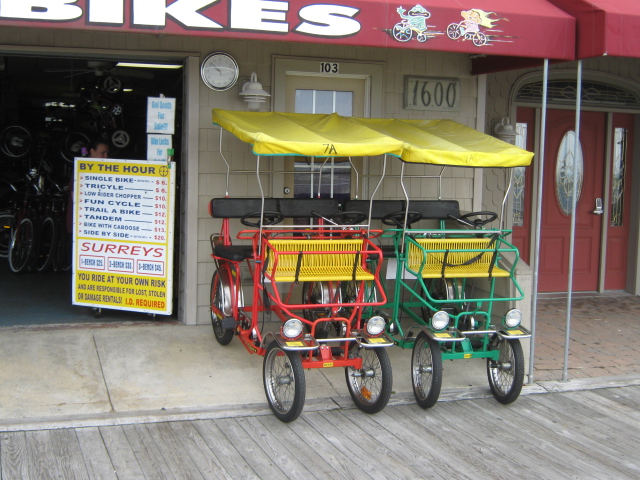 Get used to these once you have a couple of little ones.

Riding a bicycle on the boardwalk early in the morning is one of my favorite pastimes in the Wildwoods, and it’s great exercise too, building up the appetite for breakfast at Adam’s, Pompeo’s or Uncle Bill’s. If there’s a better way to start a day at the Jersey Shore I can’t think of it.

Posted in South Jersey Life, Things To Do, Wildwood | Comments Off on A Bike Ride on the Wildwood Boards