In the midst of the pandemic, I took a trip to Wildwood to check on the health of Curley’s Fries for the Summer 2020 issue of JerseyMan Magazine. You can read this article on their website, or click here to see the PDF of the magazine itself.

As the nation and the state wake up again, Curley’s Fries continues to serve its iconic, crinkle cut fries, from its two locations on the Wildwood boardwalk. It’s a sorely needed sign of Jersey Shore life beginning again. 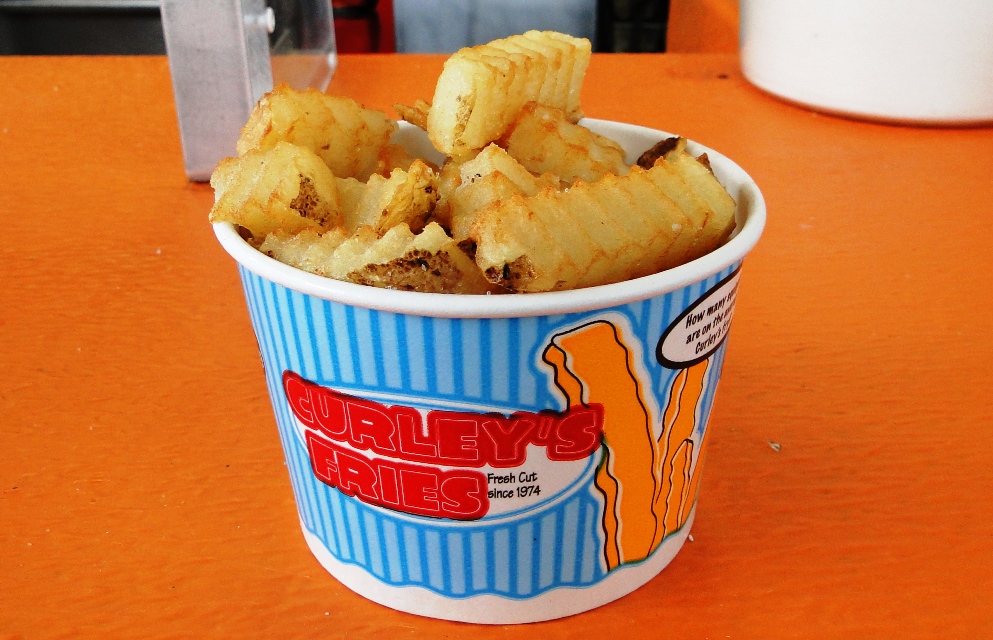 It takes considerable strength of will, even for hardened Jersey folks, to find positives in a harsh weather day at the shore.

May 22 of this year, the Friday before Memorial Day weekend, was one such day. The thick clouds effectively obscured any potential hint of sunshine. The rain, at times both spitting and heavy, became debilitating when mixed in with the stiff ocean breeze.

Despite the lack of seasonal cooperation, a hardy few were determined to get some steps on the Wildwood boards, most likely for the first time in 2020. It’s a need we natives have, especially this year, if only to have some normalcy again in what has been a monumentally difficult spring.

With an ongoing pandemic to go alongside miserable weather, there were precious few shops open on the boards, and little to help visitors feel like summer again.

Mercifully, there was one saving grace in it all…a ubiquitous French fry stand.

In this trying atmosphere, Curley’s Fries…on the otherwise uninhabited Morey’s Surfside Pier…opened its windows, as their employees showed up to serve their iconic fried potatoes to walk-up patrons for takeout. Or “takeaway”, as they called it, as if to suggest that things aren’t fully normal yet.

While the number of Wildwood visitors this day was very small, many of them…arguably most of them…still made their way to the long established fry counter.

Inside the window, save for the employees wearing masks, nothing was different. One person took orders. Another dropped baskets of chopped potatoes into a fryer and then dumped the finished ones into a tray. Another generously salted them and then scooped piles of fries into buckets for hungry patrons. Unremarkable and repetitive skills all, probably, but it’s an admirable bit of teamwork.

Most gratefully, even as Morey’s has temporarily laid off 80% of their staff, there has been zero decline in the quality of the fries.

They’re still piping hot when served, enough that some will tolerate the seared mouth flesh rather than spend an agonizing few minutes waiting to indulge. The fries have just enough of a crispy crunch on the outside and almost mashed potato level softness on the inside. They’re thick and crinkle-cut, with the skin still attached as required by unwritten boardwalk rules.

All with just enough sea salt for distinctive flavor, and available with multiple rotating dipping sauces, from Horseradish Cream to Old Bay Mayo among others. Along with the old constants of cheese sauce, hot sauce, vinegar, and ketchup.

And anytime some annoying health nut gives you grief about your love for deep fried potato perfection, you can inform them that Curley’s fries are vegan and gluten-free. That’ll shut ‘em up. 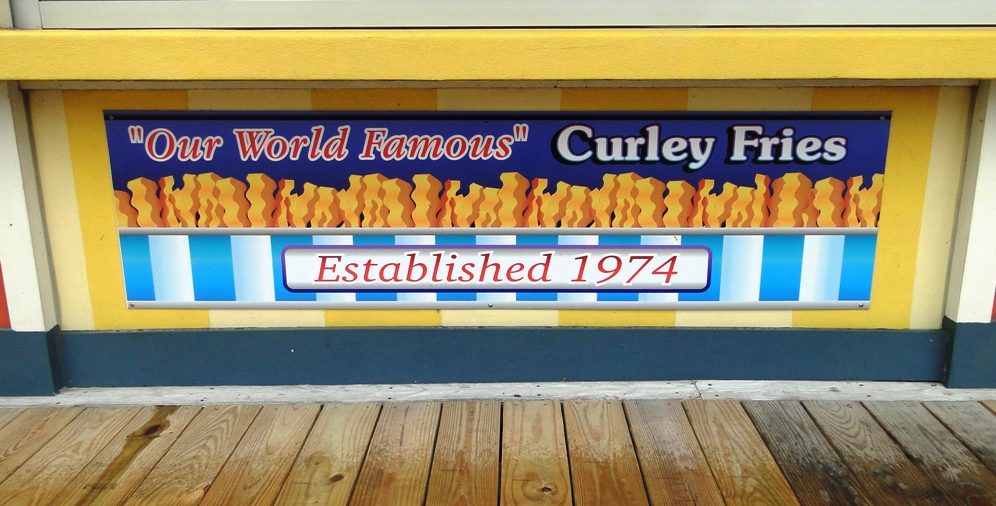 If you’re waiting with a friend at Curley’s for a bucket or the larger “barrel” of fries, you can have them hold your place in line and go read the story behind the most iconic fry stand on the Jersey Shore. It’s featured on a sign on the side of the building, but here’s a summed up version:

Yes, there was a Curley, so nicknamed for his curly hair. His full name was Joe “Curley” Marchiano, and he was both an army veteran and a linebacker at Miami University. Curley grew up spending his summers in Coney Island, where his father worked at the Surf Avenue Nathan’s. Indeed, Curley’s fries are similar to Nathan’s in size and structure.

After some years as a concessions manager in other resort towns, in 1978 Marchiano joined up with fried chicken vendor Dick Marchant at Morey’s Surfside Pier. Curley’s part of the deal was fried dough, lemonade shake-ups, and his own brand of French fries. (Incidentally, Curley’s lemonade is no slouch either.)

Almost immediately, it became clear that patrons came for the fries, and the stand was soon renamed for Curley, in a rare recognition of genius.

As the board telling the story notes, there isn’t any real secret to the greatness of Curley’s fries…it reveals right there that Curley used potato cutters from Germany, and cooked them in peanut oil. Maybe the potato cutters are really difficult to find or something, but there’s no more to it than that.

Marchiano passed in 2000; twenty years later, his recipe of fried potato greatness lives on…even on a windy and wet day on the Wildwood boards, in the midst of a pandemic and a crippled economy.

Sometimes success is simple. Get a German potato cutter, find a peanut oil supplier, and fry and sell sliced spuds at the beach. 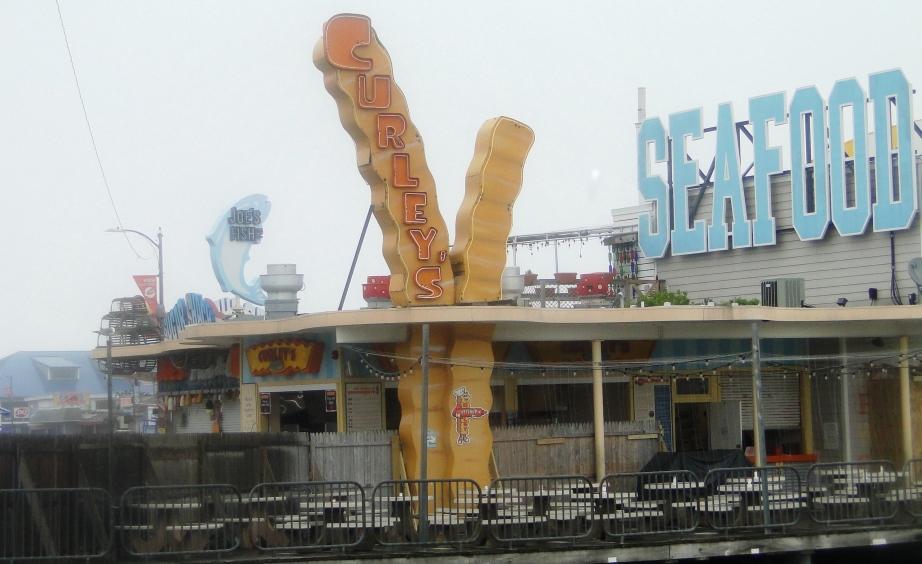 Yeah, and seafood or something.

How much of a foodie staple is Curley’s? All you need to know is the reaction to a gag the Morey’s folks pulled a year ago. Most people well know that on April 1, they should have their antenna up for pranks. But Curley’s fans were taking no chances.

On March 31, 2019, Morey’s released a press statement announcing the retirement of Curley’s two locations, to be replaced by vegan stands called “Greenery’s”. Greenery’s would be offering kale chips, roasted chickpeas, and other healthy greens that no one actually likes. In an age where every institution from baseball to politics seems to care only about targeting “millennials”, it was actually a well-crafted April Fool’s joke.

The reaction was swift and severe. NJ.com, which had listed Curley’s fries among their “64 Most Iconic Jersey Foods” just two weeks earlier, reported that the accompanying Facebook post had 4,000 comments the next day:

“I go to the boardwalk just to eat Kale chips!! Said no one ever….”

“Kale chips? Who the F$&k wants kale chips? The one thing U looked forward to is now gone! New Jersey becoming the East Coast California!”

“I legit cried. Stupidest decision ever. This place is a Wildwood trademark…. Huge mistake.”

“Glad to hear that it was all a joke BUT…that was not nice to do, especially the day before April Fool’s day!”

“Threatening to take away my Curley’s Fries is no laughing matter!!”

You can still find the original “Greenery’s” press release on Morey’s website, (www.moreyspiers.com). Its politically correct tone is priceless. Here’s this writer’s favorite pull quote: “For the last fifty years Morey’s Piers has been growing and re-inventing itself to keep up with an ever-changing marketplace.”

Most businesses take themselves too seriously. Thankfully Morey’s isn’t one of them. But yes, that was a tense moment. Forsaking Curley’s Fries for kale chips probably would have caused a justifiable outrage. 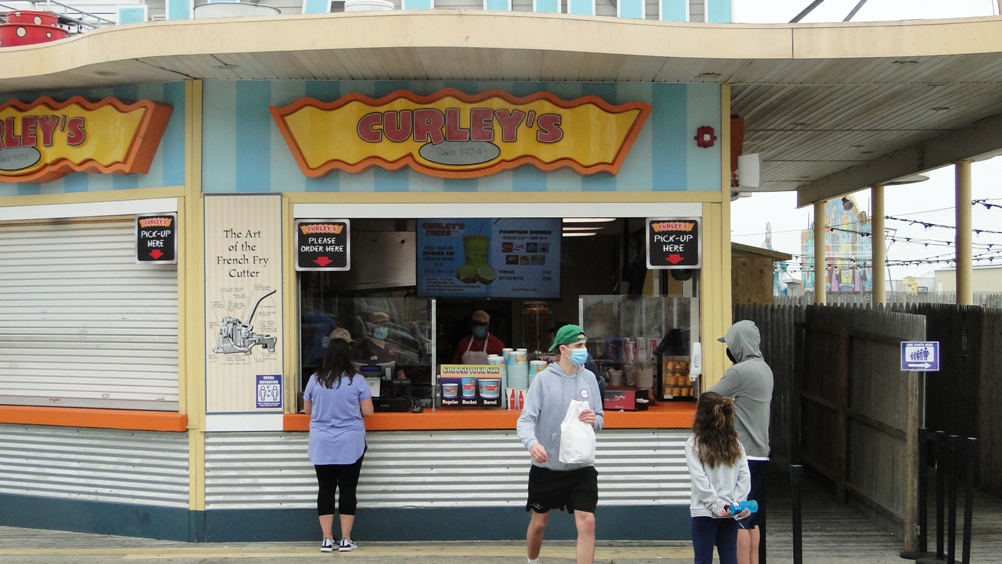 Much has been said and written about heroes on the front lines in recent months. First responders, doctors and nurses in hospitals, nursing home attendants…even supermarket employees, who had suddenly found themselves in a high risk occupation.

All of the accolades and appreciation, and accompanying hazard pay, is well-deserved. Yet when a flu virus not only causes double the death count as a typical flu season, but also devastates an economy, sometimes what we need more than anything else is to see something normal again.

As ruffled as South Jersey became at a mere joke suggesting Curley’s fries would be replaced in 2019, in 2020 we’re grateful for anything we love sticking around. When there isn’t even any baseball, things can seem especially bleak. Suddenly, the availability of world class French fries at the beach is appreciably more meaningful.

The celebrated Jersey Shore fixture that is Curley’s is still alive. The two-story fry-shaped signs still standing on the boardwalk, an iconic food stand remaining open on the most miserable of May days, is one anchor of hope that on the other side of all of this, our favorite institutions will still be here.