So I had this big mess of Camden Yards food posts that went everywhere, and Google didn’t seem to like any of them. So I figured I’d combine them all, and just make them one nice big post about Camden Yards food. Enjoy!

When first-timers visit Oriole Park at Camden Yards, they’re almost universally told to “try Boog’s BBQ.” The smoke wafting from the tent on Eutaw Street has been a feature of Camden Yards since its opening in 1992.

Long lines form at Boog’s BBQ stand, especially on high attendance nights. Fans get their picture taken with the large first baseman from the Orioles’ salad days, order a sandwich or platter of pit beef or turkey, enhance it at a banging condiments stand, and either sit at a Eutaw Street picnic table to eat or watch batting practice. 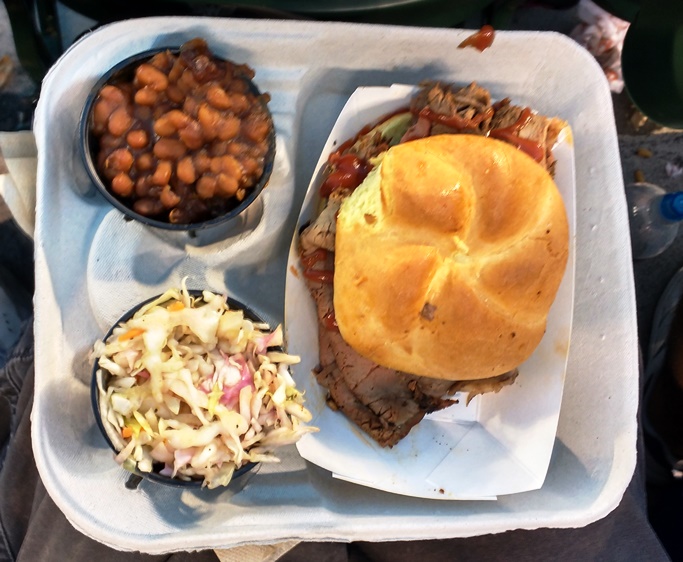 Not hard to see why it’s so popular.

The pit beef is recommended most by online reviewers, but the turkey sandwich is pretty good too, and the platters with slaw and beans offer decent value; you likely won’t be hungry afterward. One Orioles employee suggested to me to bring your own bread and get your sandwich “naked” to get more meat on your plate. Worth the effort.

Try to get to Boog’s BBQ early, if you don’t want to miss any of the game. 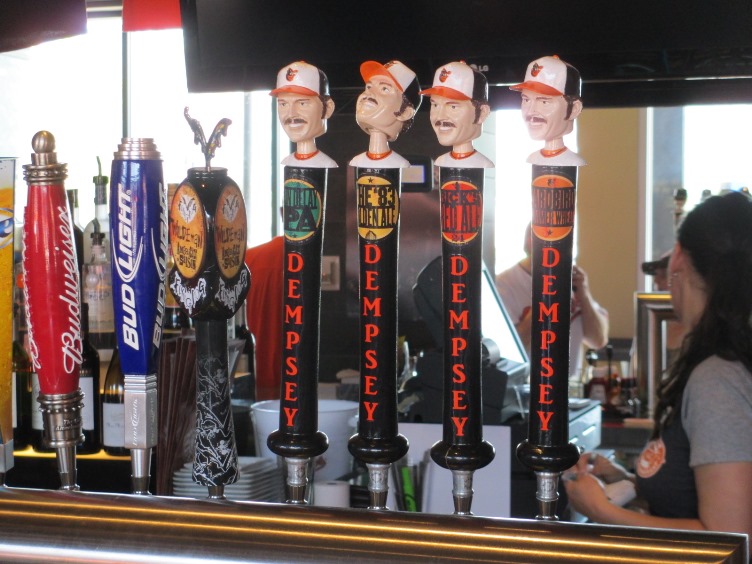 True Birds fans know that Rick Dempsey was good enough to have beer named after him.

Dempsey’s, named for 1983 World Series MVP Rick Dempsey, is a restaurant built into the warehouse. It features brick walls, O’s memorabilia, and beer taps with craft brews like Rain Delay IPA (click here to see why Dempsey is associated with rain delays).

The menu is pub-style and includes appetizers like crab cakes and rock fish tacos, and the main menu is mostly burgers and sandwiches, like the Dempsey Club. There’s also the “Walk-Off”: a Roma sausage in a pretzel roll with Old Bay crab dip. Save money and appetite for that one.

If you want to try Dempsey’s and not miss any of the game, you have to get to a Eutaw Street entrance as soon as the gates open. Long lines form very quickly, especially on high attendance nights.
Don’t miss Rick’s poetic dedication to Memorial Stadium inside. 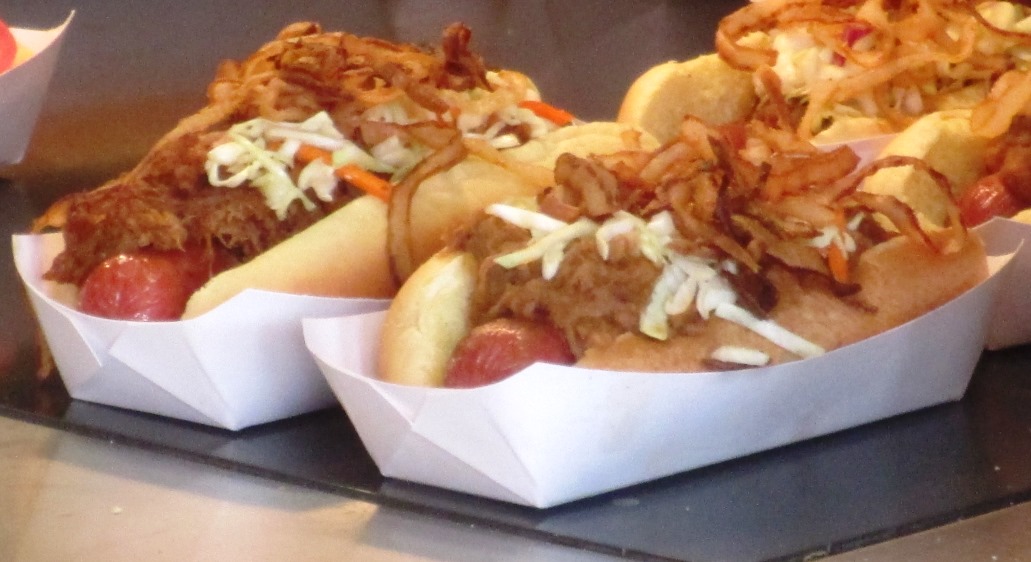 OK I give, where’s the mustard?

Elsewhere on Eutaw are a few of the unique food stands at Camden Yards. There’s the Bud & Burgers and Stuggy’s Gourmet Hot Dogs at the north end, where you can order unusual burgers and dogs (the crab mac and cheese dog is very popular) in case a simple dog doesn’t wow you.

There’s also a Eutaw Street Market in the warehouse where you can find grab and go items, and at the south end is a Eutaw Street Gyro Grill. You may lament the disappearance of the “other” BBQ stand, but the gyros and spinach pies are pretty good. Besides, Boog’s BBQ is plenty BBQ enough.

Oriole Park is still in Maryland last time I looked, so crab stuff is pretty popular. Here are three more favorite Camden Yards food options of mine, just because I love Old Bay… 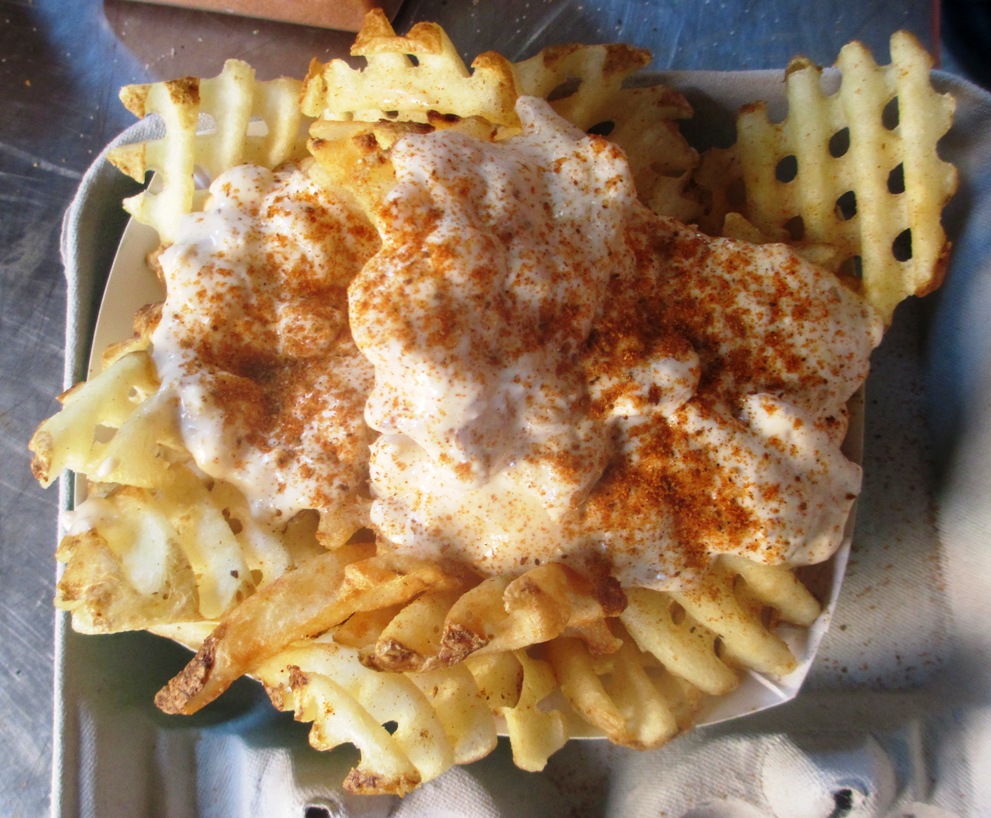 1) Crab Dip Waffle Fries. This is a pretty big go-to item for Orioles fans. If you’re familiar with the Chick-Fil-A waffle fries (and who isn’t?), they’re like them, but topped with Maryland crab dip sauce, and you can shake on some Old Bay seasoning at a condiment stand.

Get them at Old Bay Seafood, Freestate Fries or the Flying Dog stands, and get a fork and napkins…you’ll thank me. 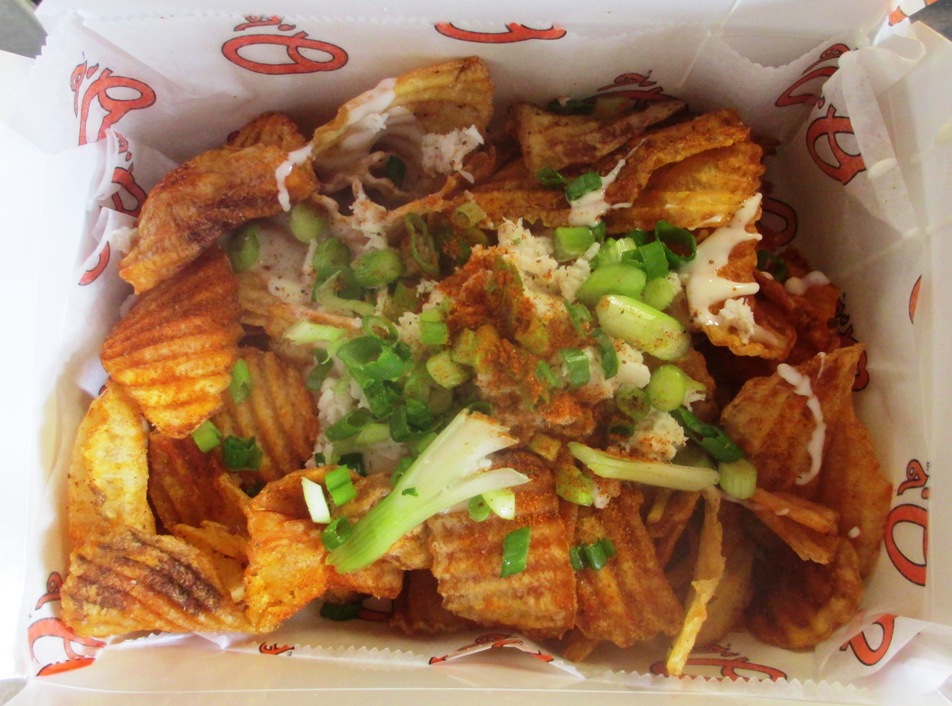 Check out those scallions!

2) The Crab Chipper. The Chipper stand has become one of the more popular Camden Yards food options – and this Crab Chipper features kettle chips (or pork rinds!) topped with crab meat, white cheddar, green onions and Old Bay…so they’re, you know, kind of like fancy nachos.

It’s a decent quantity of food too, especially if you get them in a souvenir helmet. Way salty though, so grab a drink with it… 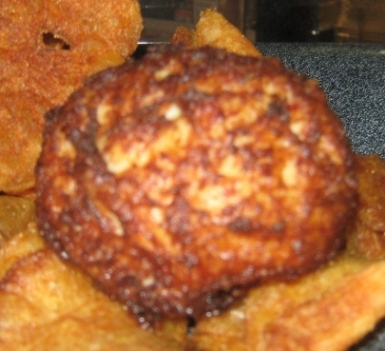 The Official State Fish of Maryland.

3) The Old Bay Seafood Crab Cake. I remember in the early days of Oriole Park watching a friend of mine shell out $4 for a crab cake the size of a golf ball. This was before ballparks were known for food options. Hope he enjoyed it.

Today the crab cakes may be more expensive, but they’re now appropriately baseball-sized and much tastier – the Orioles had a chef sample 50 local crab cakes (!) to come up with a recipe for this delicacy. (Hopefully not at once.) The Old Bay stands are in the lower and upper concourses.

There you go…three crab-tasty Camden Yards food options. But you can go cheap here as well.

Can You Bring Food Into Camden Yards?

The short answer is yes, you can…the Orioles allow a 16*16*8 soft-sided bag or cooler, so long as it doesn’t contain alcohol or potential projectiles.

But the best part of this money-saving tip is the possibilities you have with the numerous outside vendors…so here are three tips on where you can find cheap outside grub to bring into the Yard. 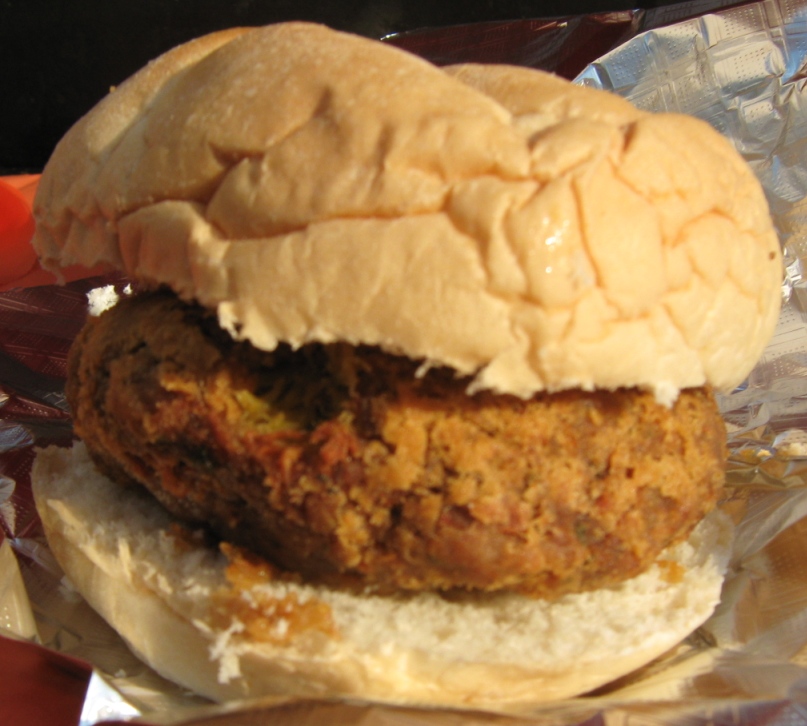 Inside the ballpark, it costs more without the roll.

1) Pickles Pub/Slider’s/The Bullpen. I’m not sure which of these three corner pubs sets up all of the tents and outdoor grills and full bars, but I expect it’s all of them. The three establishments are across the street from the ballpark on Washington Street, and the entire area gets packed with pre- and post-game partiers.

You can get a hefty dog, sausage, burger, or crab cake sandwich here for much less than you’d pay inside the ballpark, of course, and there are tables with people selling peanuts, pistachios and bottled water too.

Best part? Have a cheap Natty Boh while you’re filling your goody bag…since you can’t get cheap beer OR Natty Boh inside the ballpark. 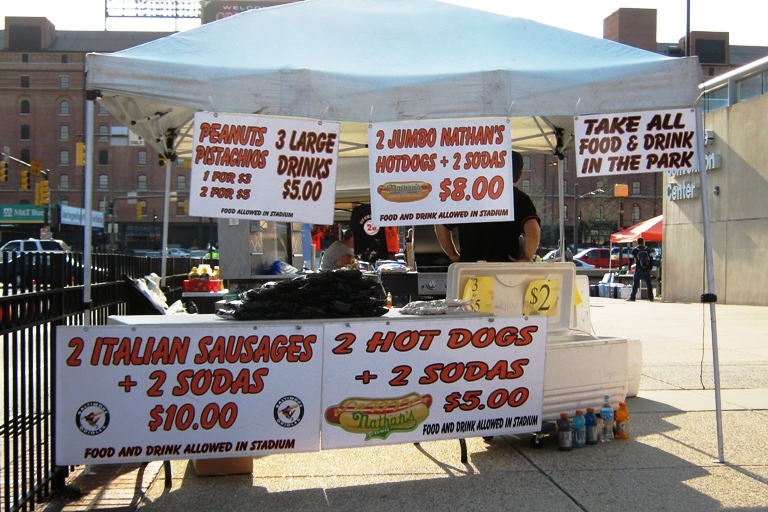 With so many combinations, there’s sure to be one for you!

2) Vendors On Howard And Conway Streets. There are a plethora of vendors with grills selling dogs, sausages and chicken sandwiches, and they’ll offer you a nice deal if you’re willing to haggle and offer to buy more at a discount.

As with the vendors near Pickles Pub, on Conway Street, you can also buy much cheaper gear and souvenirs. This is ideal for people arriving by Light Rail…the vendors are right there across the street. 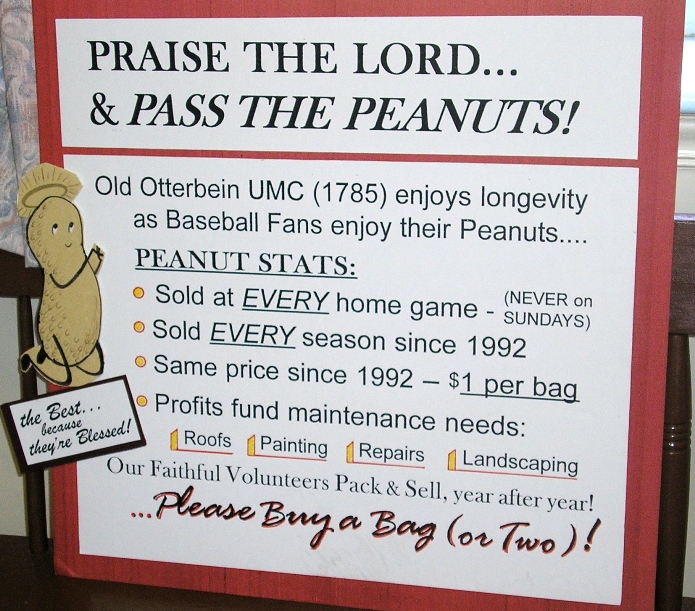 Photo courtesy of the Old Otterbein United Methodist Church. They said I could use it.

3) The Peanut Church. The Old Otterbein United Methodist Church is nicknamed the “Peanut Church”…they’ve been selling fresh bags of roasted peanuts cheaply since Camden Yards opened in 1992, and they’ve used the profits to maintain the church with a new roof and painting and such. If you’re a person of faith you’ll probably think it’s a cool thing. It’s on Conway Street, and if you’re coming from the Inner Harbor you can’t miss it.

Finally, there’s a Jimmy John’s and a Chipotle just steps away, if you want bring food into Camden Yards from someone familiar. But that’s kinda boring.

So there you go…some food options at Oriole Park at Camden Yards. Enjoy, and let me know when you’ll be there. 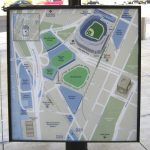