Jeff Holman is a member of the Holman family, a name you’ve heard if you’ve ever shopped for a car in South Jersey. But he’s made his mark coaching high school tennis, with over 2,000 victories to his credit. I interviewed him for the October 2013 issue of JerseyMan. You can view the PDF of this article here. 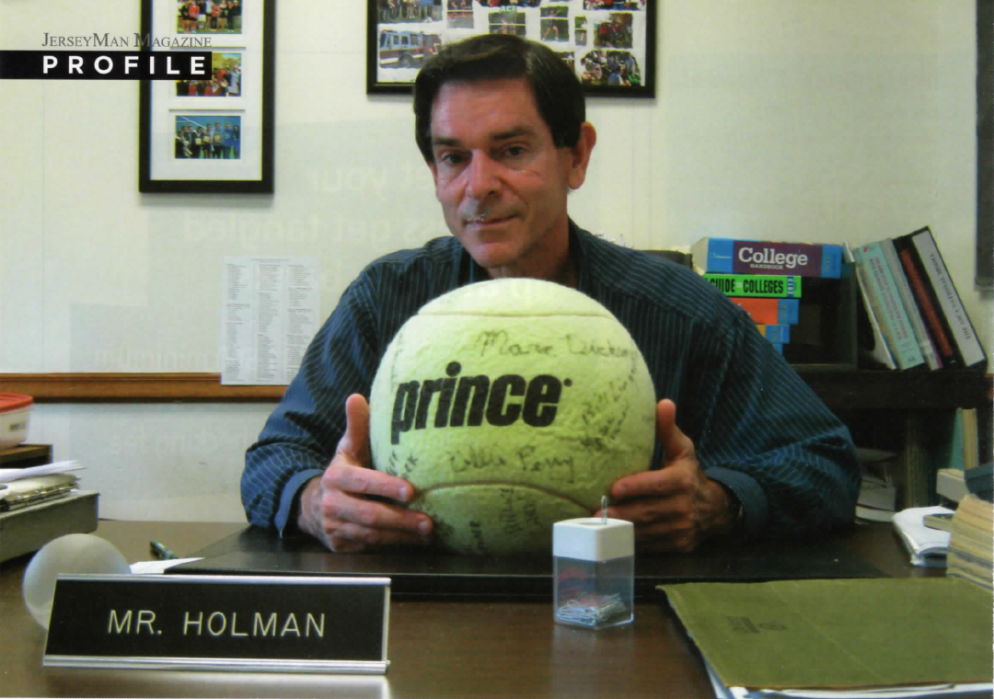 Jeff Holman is a member of the Holman car sales family, but he’s made his own mark in high school tennis coaching.

Mention the name “Holman” to a South Jersey native and chances are a car dealership will come to mind. The name has been selling automobiles in the Garden State for nearly as long as automobiles have existed. Most readers of this publication have probably either bought a car from a Holman or know someone who has.

But over the last three and a half decades, Jeff Holman has achieved what could be called legendary status in a realm that has nothing to do with Cadillacs.

By the time you read this article, Holman, who coaches both girls and boys tennis at Haddonfield High School, will likely have passed an astonishing 2,000 victories—both teams are within striking distance of 1,000 wins each. The boys’ teams have won nine state group championships; the girls’ team has won 18 state group titles and three Tournament of Championship crowns—often against larger schools with bigger talent pools.

He’s gotten quite a bit of recognition himself; 20 Coach of the Year awards, and membership in five Halls of Fame, including Camden County Athletics and the New Jersey High School Hall of Fame, are a small sampling of the countless awards and honors he’s received.

As successful as the family is in car sales, Jeff has proven that the Holmans aren’t a one-trick pony. 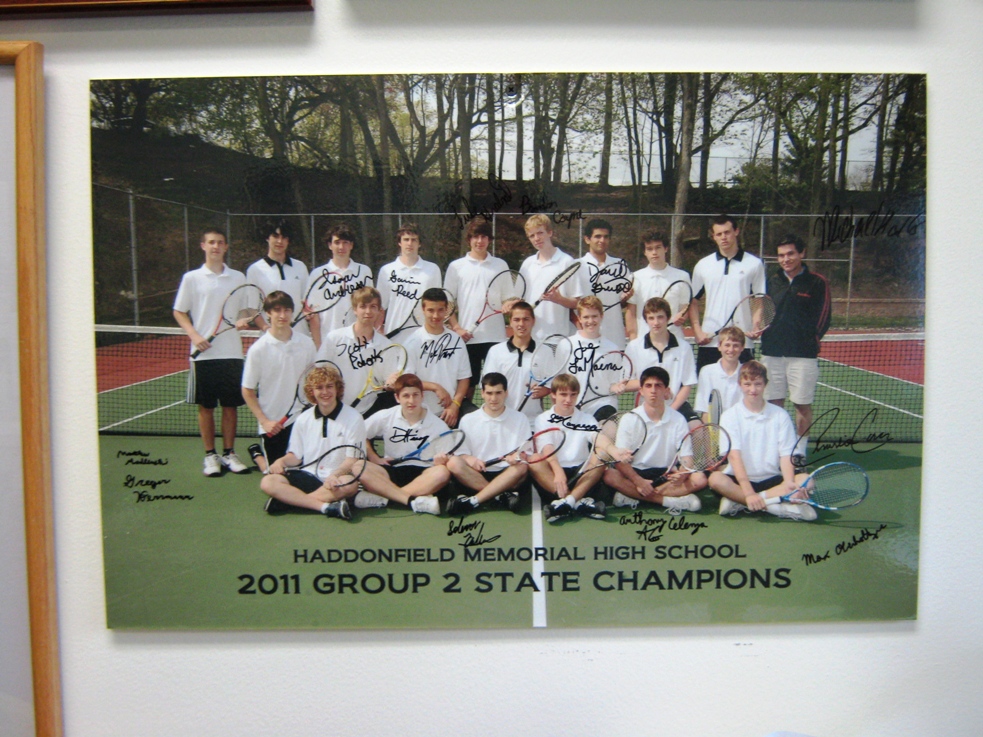 As a young lad, Holman probably thought he would sell cars when he grew up. He once wrote a “future career” paper on being a car dealer, which given his background was probably an easy assignment. But he says no undue expectations were placed on him by his Jersey famous family.

“I have two siblings; my sister Mindy is now the CEO of Holman Enterprises, and my brother Steve is a cabinet maker in Dorset, Vermont. Mostly, my parents encouraged me to do what I wanted to do. I had good teachers that encouraged me to get into education.”

Holman was a decent player at Haddonfield High, known for not rushing the net and simply wearing opponents down. But he knew he wasn’t destined for stardom on the court either. He attended college at Princeton, where the talent was, to put it mildly, substantial.

“The #1 varsity player at Princeton (Bill Colson) was ranked ahead of Jimmy Connors. My roommate was a two time Nebraska state champion; he wasn’t even a consistent starter. I was realistic enough, a good high school player, but I never thought I could play professionally.”

After graduating from Princeton, Holman returned to Haddonfield as an English teacher, and served as an assistant coach on the girls’ basketball team. Haddonfield being a small school, there weren’t enough tennis courts for two teams, so the girls’ season was moved to the fall in 1976. Their coach, Ellie Kind, was also the field hockey coach, so Holman took over the tennis team when the two schedules merged.

Two years later, Ken Grabert, the boys’ coach, “decided that driving the bus to events paid more than coaching, which was correct”, and Holman took over the boys’ team. 35 years later, though he’s now a guidance counselor, he is still on the court with young people most afternoons, steadily adding to the impressive win totals and titles. 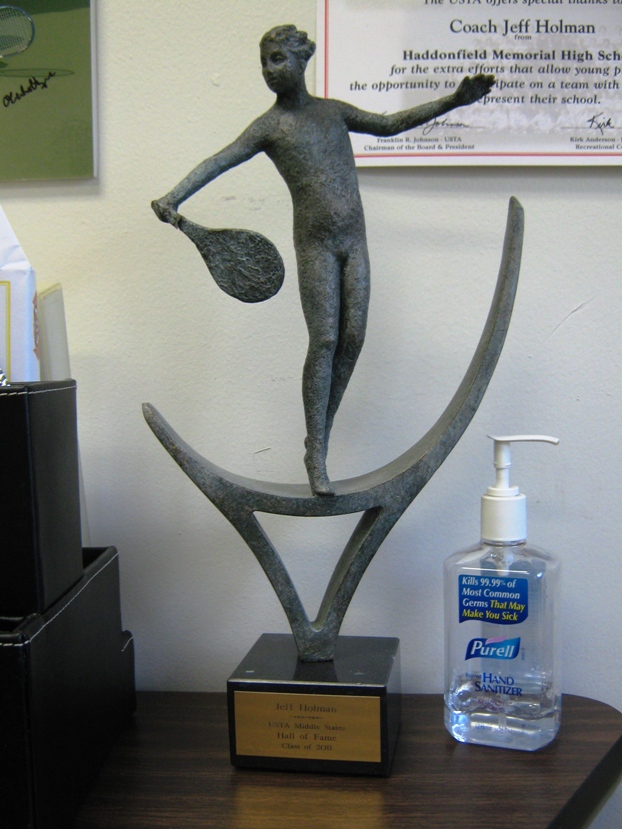 One of many awards found in Jeff Holman’s office.

Leaders in any endeavor will often tell you that success depends on choosing the right personnel. In high school sports, this presents a significant obstacle. Coaches don’t have the option of recruiting the best players from a 500-mile radius. The kids in town are what they’ve got.

In this environment, Holman magnanimously gives some credit for his success to local tennis clubs as a place where parents teach the game to kids. But he also piled another challenge on top of recruitment limitations: a no-cut rule. Every student who signs up will have a chance to represent Haddonfield tennis. Jeff explains the reasoning:

“One of the best players I ever had was a girl named Phoebe Figland, she was part of the 1980 team that won the first ever Tournament of Champions. Back then we had four courts, I had to keep 16 girls, and Phoebe as a freshman was number 17 so I had to cut her. Luckily she wasn’t one of those kids that gets discouraged easily; she came back and earned a starting varsity position, and went on to become a Division I player at the University of Richmond.

“Maybe in Phoebe’s case it gave her more inspiration to become as good as she did. But I think other people might have quit. Since that time I’ve always looked for a way to keep everyone involved and not cut people.”

That means arranging more matches with more teams, which Holman does. “In our program we have 40-50 players, and schools we play against may have 10-15. So by having a lot of matches and a separate rotation system, even though our team is bigger, all of the players get to play in matches. If they are all involved and can have a fun experience and see improvement, they’ll want to keep on playing and getting better.”

If you’re looking to ferret out a nugget from him about how to successfully coach high school sports, that is mostly what Holman will tell you. Keep all the kids involved, having fun, and playing tough competition. Encouragement and positive reinforcement. Not much about fundamentals.

“The mechanics, a lot of that is learned in the offseason. It’s hard to change someone’s mechanics during the season. They might get worse before they get better. There are outstanding professionals in the area that our students have gone to, and these teachers have instilled some mechanical knowledge of the game.”

So instead of teaching backhands or “getting into the zone”, Holman’s focus is on arranging as many matches as he can with quality opponents, and separating practices into groups so that all of the players get time in with the coach.

He even drives the team bus. It’s a gesture that appears to be a show of humility or bonding, but it is actually rooted in practicality: “If the school doesn’t have to pay a driver, then tennis, which has no transportation costs, enables Haddonfield to play an ambitious schedule. We can go to North Jersey or I can schedule more matches in a week. In this era of budget constraints, not having to play a bus driver really frees up our program.”

Whatever it takes. “I think it’s important to convey that this team is very important to me and I’m going to work harder than anyone else. And that whatever I ask the players to do, I’m going to do the same thing or more in terms of commitment.” 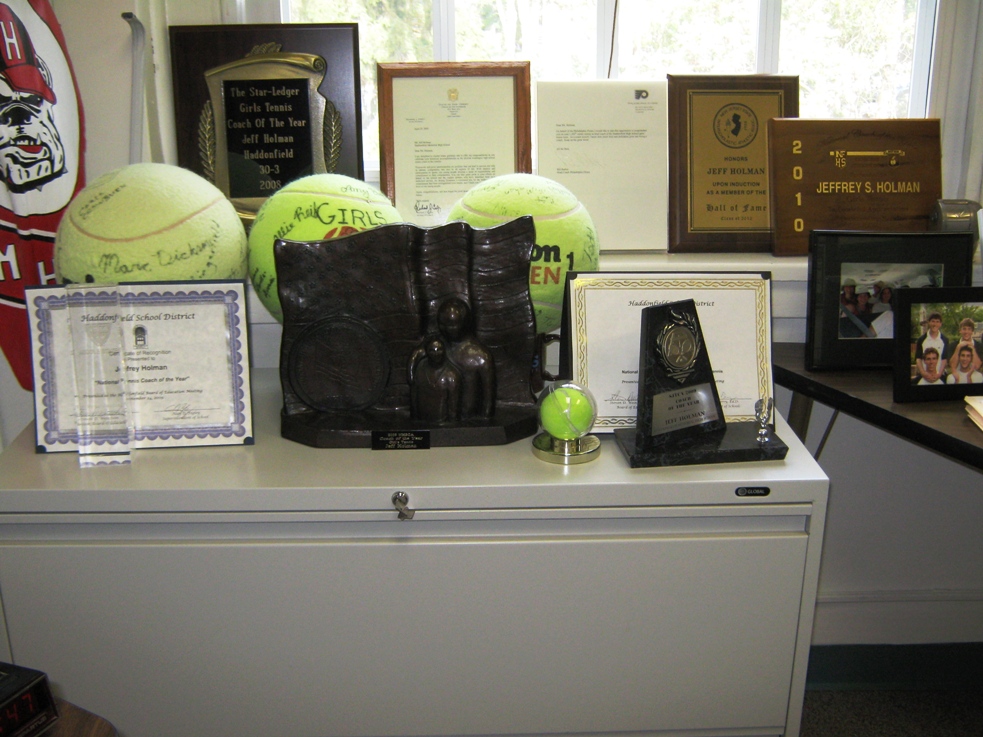 So many awards it almost blocks the window.

Holman’s proudest achievement? After coaching 70-plus seasons, he has trouble picking a favorite memory. “I guess when you do something the first time it stands out. On the girls’ side I think back to a team in 1980, the first year New Jersey held the Tournament of Champions, when the state champions of all the different divisions have a playoff. The 1980 team won that initial tournament. The boys kept falling short in state tournaments; finally in 1983 that group of players was the first Haddonfield team that won a state title.

“Haddonfield has always been a very successful athletic school at everything, but there have only been a couple of teams that have won a Tournament of Champions. The girls’ tennis team has done it three times now. It’s a very rare achievement.”

Holman tempers any appearance of boasting. “It’s nice to win championships, and we’ve done our share of that, but above all we’re trying to instill a love of the sport, and in their later lives they are still playing, and that maybe part of the reason was the Haddonfield program.”

One of the winningest high school sports coaches in the country seems reluctant to suggest that what he does results in more than young people enjoying the game of tennis. But he’s undoubtedly played a role in the character building of many young people. To teach them that they will have a chance to get in the game, to play against the best, and to be able to challenge opponents with unfair advantages and still win, undoubtedly leaves a stamp of confidence on an adolescent mind where self-esteem can often be in short supply.

Especially for a kid that might not have otherwise made a team of 16.

Jeff Holman doesn’t have an apparent personality for car sales. He is a soft spoken, even-keeled fellow, highly regarded by all who know him, but there is still a cauldron of quiet determination in him. If it weren’t for Haddonfield’s reputation as a high school tennis powerhouse, you wouldn’t expect this quiet gentleman to bring a team from a small school that can whip your big school’s behind.

And for several generations of Haddonfield tennis playing alumni, the Holman name means something more than an established place to buy a nice automobile.

Because She Can – Patrice Banks