Martinsville Speedway features some of the best racing on the NASCAR circuit, because there’s no place to hide. I contributed this piece for the Spring 2014 issue of the excellent Stadium Journey magazine. Click here to see the XPS file of the article, as it appeared in the magazine. 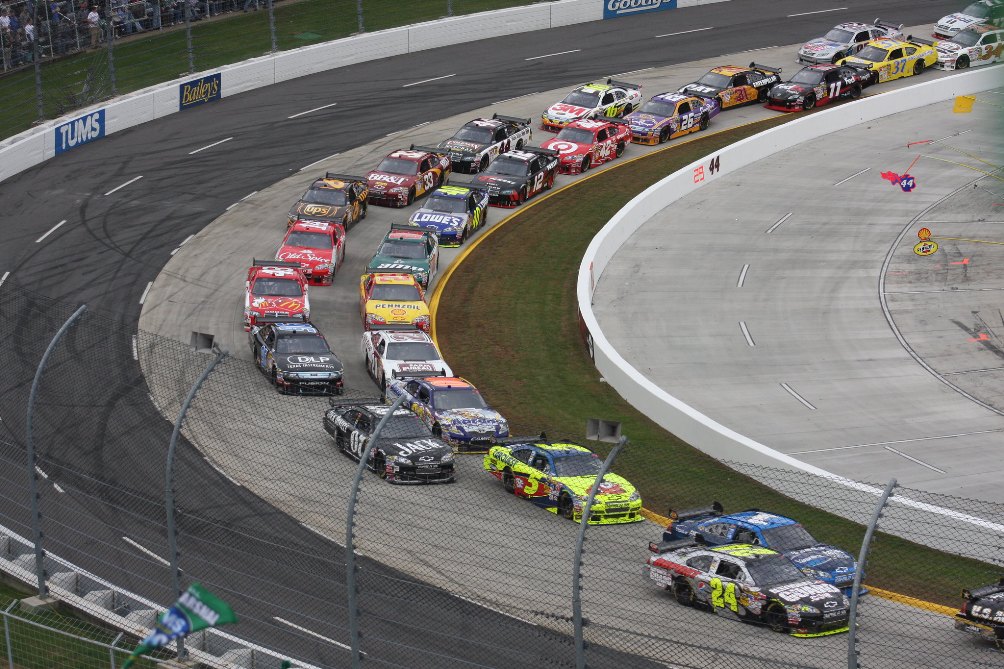 Fighting for tiny bits of real estate, the way it should be.

Stock car racing was built on lack of space for cars to race.

Possibly more so than in any other sport, NASCAR fans lament the good old days. The sport has changed enormously, especially in the last 20 years, and not for the better in many fans’ opinions. The “Chase” playoff remains unpopular (and with good reason…it’s the most idiotic way of determining a champion in sports), and the cars have become so spec that it’s hard to tell whether driver skill is a factor in success anymore.

Perhaps most of all, the excitement of racing cars with fenders has suffered from the sport holding events at larger, faster tracks…where drivers can spread out, run three- or four-wide, and build up a big lead on the rest of the field…and truly ride around in circles, as non-racing fans frequently complain.

In 1994 there were just six such speedway races (not counting restrictor plate races at Daytona and Talladega, which are a different animal) on the Cup schedule; on the 2014 schedule there will be 14.

In the longtime NASCAR fan’s mind, that is taking the sport in a seriously wrong direction. It’s even worse than the concrete donut artificial turf baseball stadiums…at least the game on the field wasn’t made dramatically different by them.

So if you want to see what those grizzled racing fan geezers are talking about when they speak of how great a sport NASCAR once was, take a trip down to southwestern Virginia and witness a stock car race at Martinsville. 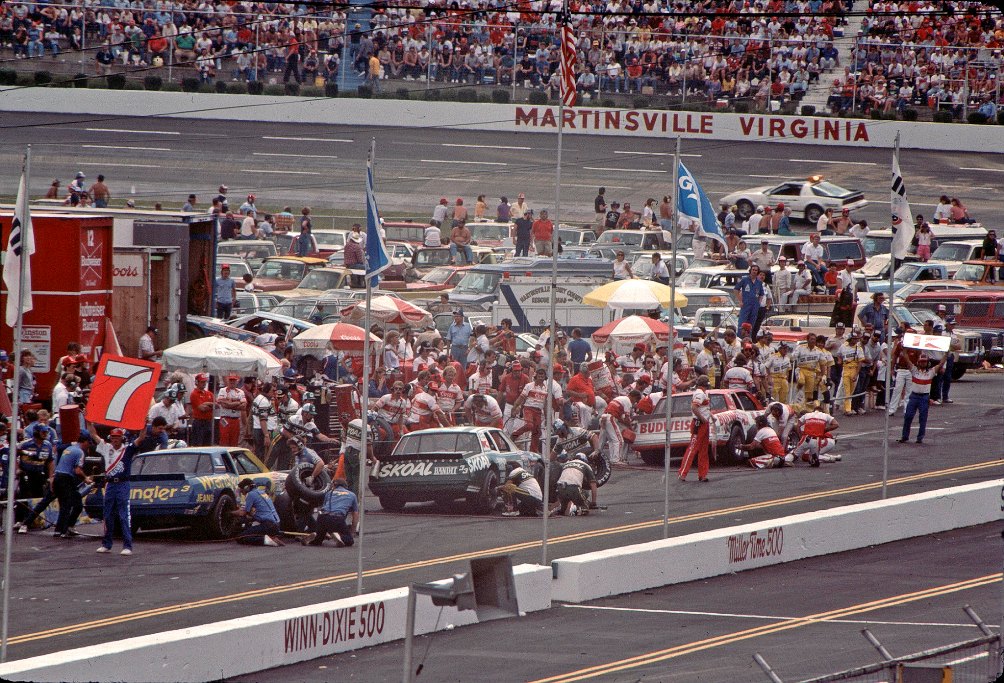 Martinsville Speedway is older than NASCAR itself. A visionary named H. Clay Earles built the racetrack in 1947…and must have immediately sensed he was onto something, because the 750-capacity racetrack attracted 6,000 fans to its first event.

In 1949 NASCAR held its first event there, a race that was won by Red Byron, and Martinsville is now the only racetrack left from NASCAR’s original schedule that stills hosts events.

As smaller, classic tracks in North Wilkesboro and Rockingham have given way to large cookie-cutter speedways in Chicago and Vegas, more and more NASCAR fans speak highly of the remaining tracks that stretch less than a mile. The half mile Bristol Motor Speedway, where NASCAR holds two races each year, is the heart of racing simply because of the venue itself, always bringing fans a decent race often complete with post-race fights among drivers.

Martinsville Speedway is not as revered as Bristol, but it too always features events that are stock car racing at its best. 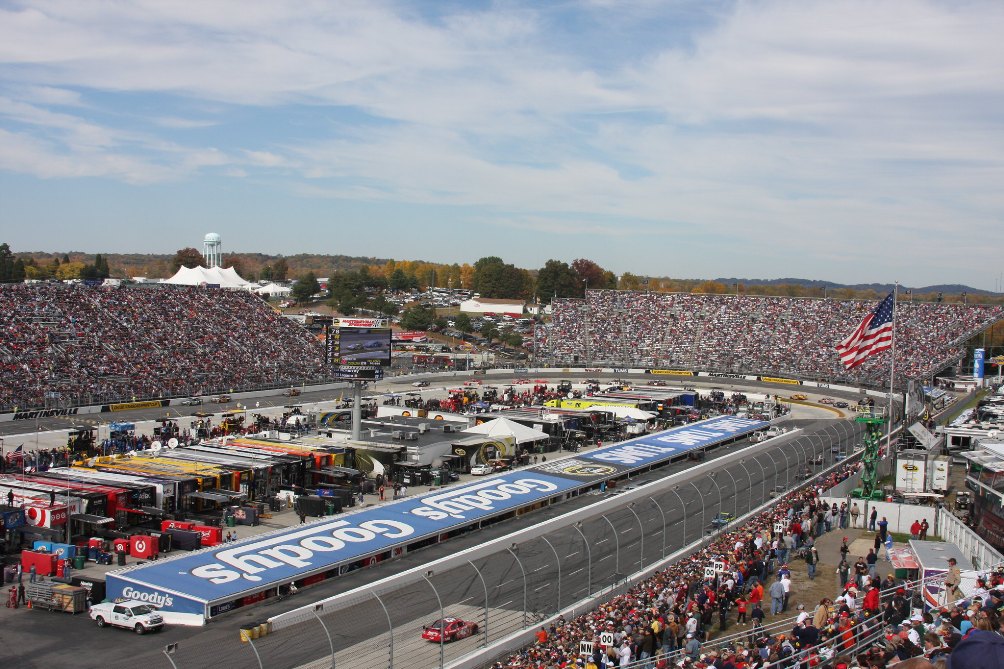 Increasing the population of Ridgeway by 6,000%.

Ridgeway, Virginia, population 775, is the actual home of the track. It’s not easy to get to. It’s in a rural locale close to the Tennessee border with Roanoke as its nearest metropolis. Roads leading into town aren’t built to handle the tens of thousands of cars that will be arriving on race day. In my first trip, I spent the night before in Roanoke some 50 miles away. My companion and I left at 6:00 in the morning for a noon race; we were finding our seats during driver introductions.

You’ll probably park on grass, and you’ll pay a nice chunk of change for the privilege. This town subsists on events at its racetrack.

Once you endure all of the hardships getting to the venue and finding your seats (hopefully after buying one or more of the legendary hot dogs) the sheer tininess of Martinsville Speedway grabs you, especially if you’ve attended events at Charlotte or Atlanta. Before the race there is literally no place to put the racecars…they are parked right there on the track.

On television Martinsville looks like two long straightaways with very sharp and low-banked turns…hence the “paper clip” appellation that is often applied by commentators. Given the speed that cars run…close to 100 MPH on the straightaways…a TV viewer might suspect that the straightaways must be close to a half mile long. In fact the entire speedway is just .526 of a mile…the shortest track on NASCAR’s Cup schedule. The straightaways are just 800 feet.

The track is so small that when a race starts, the drivers at the tail end of the field are already half a lap down. And it isn’t long before the leader will start putting cars a lap down, and the track turns into a conveyor belt of cars. 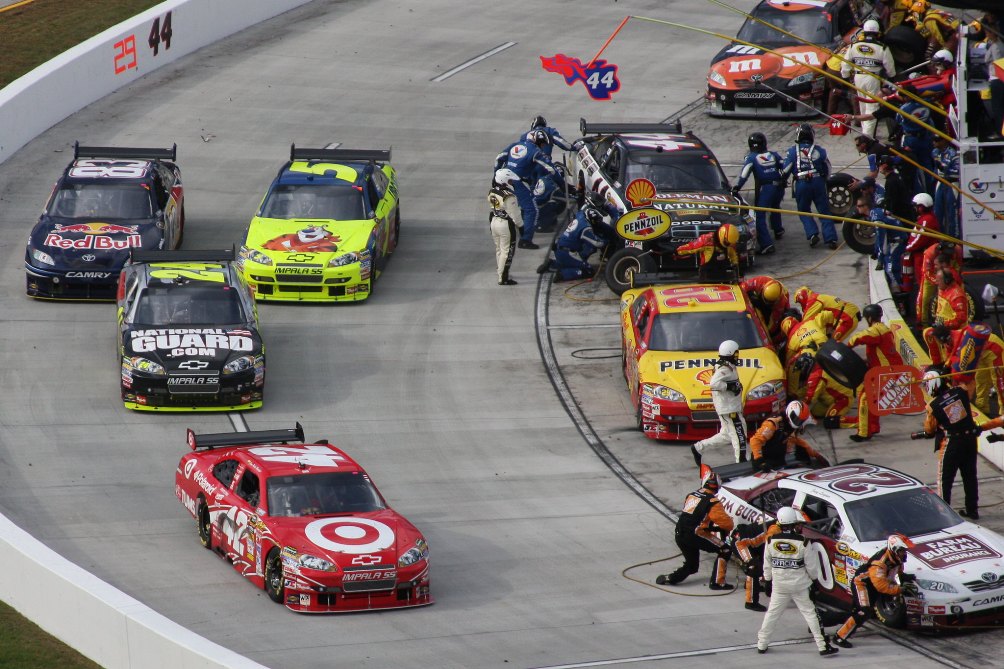 There is no place to hide. Drivers push and shove, slide and spin. Crashes take out four or five cars as a dozen drivers behind them stand on their brakes for lack of a route to pass through. As the race progresses, many of the cars take pretty good beatings…and many will be missing fenders and bumpers by the end of the event.

No other track tests a driver’s mettle and skill. Racing around a banked speedway at 180 MPH may present its own challenges, but a racer better bring everything he’s got to Martinsville Speedway. This place requires taking a racecar from 35 to 105 and then back again 1,000 times, and doing it inches away from other racecars throughout. All the while keeping one’s cool in check and periodically navigating a treacherously tiny pit road. Drivers must save their energy, save their temper, and save their brakes, too, because they better have something left at the end.

Where’s The Love For Pocono Raceway?