You can race some serious go-karts – or even your own car – at several venues in the Philadelphia region. I wrote this piece about them for the Fall 2017 issue of JerseyMan. You can read it on their website here, or you can view the article PDF here. With all respect to a great magazine, I liked my title better… 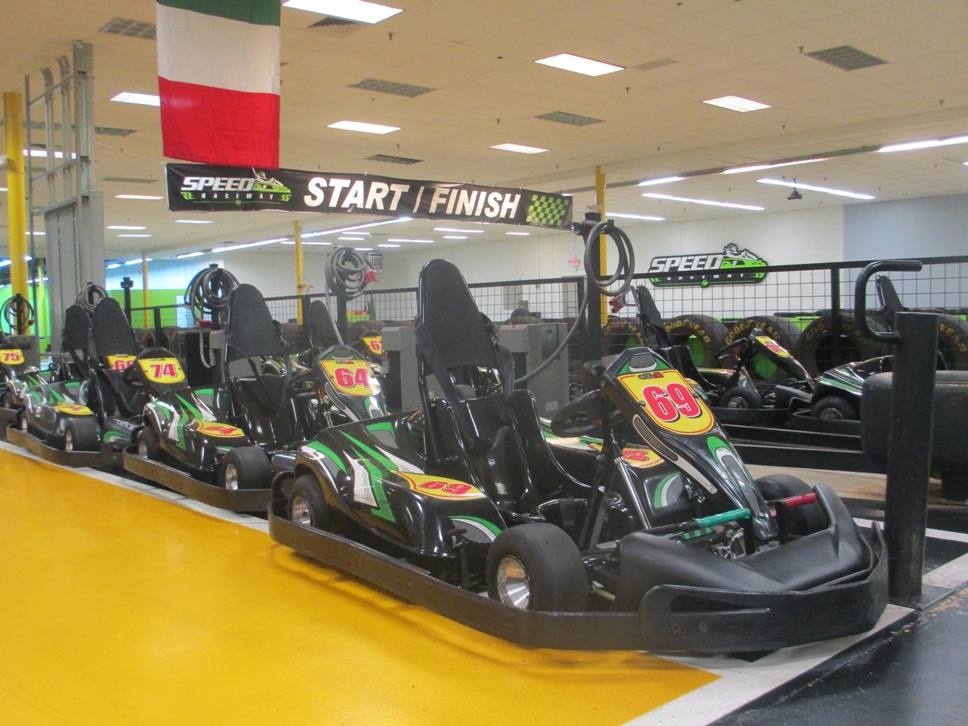 “Flat out till you see God, then brake.” – Anonymous

If the closest you’ve come to channeling your inner Jeff Gordon is running a #24 car in a boardwalk go-kart at the shore, it’s time to broaden your horizons. If you don’t need to at least let up on the hammer to get through a turn, it ain’t racing.

Philly-area racing fans not only have two high-end venues a short drive away, both of which feature various experiences for would-be racers, but we also have the option of racing electric karts inside a converted retail store. True.

Boardwalk go-karts might be fun for the kids, but you’d get some strange looks if you suggested it for a team-building event. 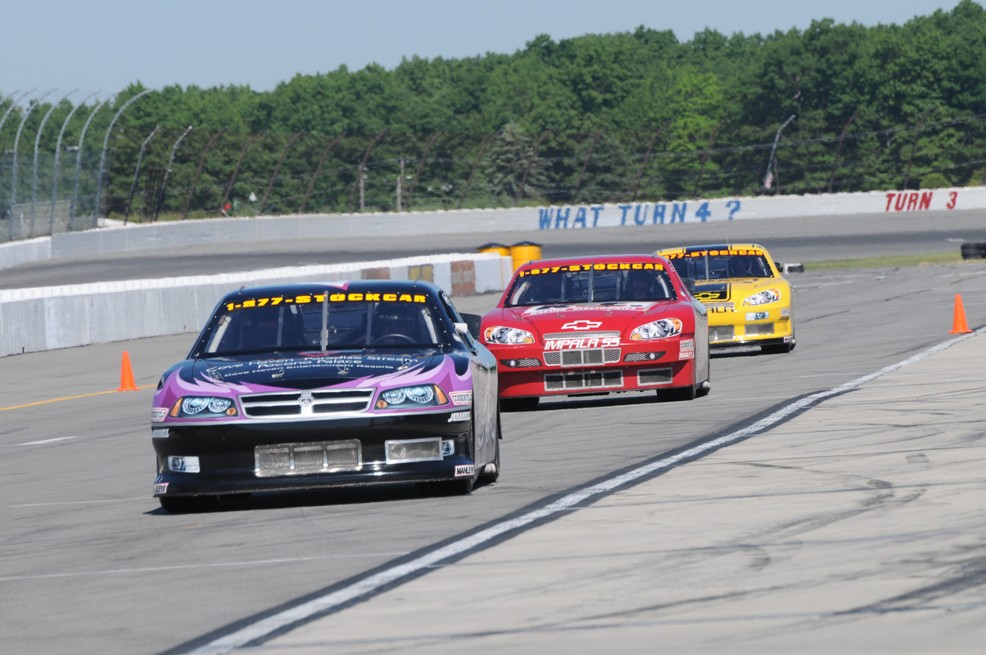 Two hours north of our fair city is Pocono Raceway, a track unique enough to have a nickname: The Tricky Triangle. The Triangle hosts NASCAR’s top series twice a year, and its scalene layout boasts the longest straightaway on the circuit. That lengthy stretch would lead to the highest speeds, if drivers didn’t have to stand on the brakes to survive the 14-degree banking in Turn 1.

Courtesy of Jesse Roverana and the crew at Stock Car Racing Experience, you can run the Triangle yourself…either as a student in a 600HP stock car, as part of a team in a go-kart race, or even…get this…in your own car.

The student experience includes an hour of safety instruction before one gets into a firesuit and inside a racecar, driving behind a professional who leads the way to speeds as high as 160 MPH. It’s a life-transforming event, according to Roverana.

There’s also a road course for go-karts inside of the famed racetrack, and lawnmower engine karts these are not. They ride an inch off of the ground and go as fast as 50 MPH…helmets required…and races are run with three-man teams for a full three hours. If you’re planning a corporate event, nothing builds team spirit like firesuits and driver changes.

“Every time I sell this to a corporate, they’re calling me back next year because employees want to do it again,” Roverana says. “Smack talk goes on all day long.”

Car guys like to bring their own to race that long straightaway too. “It’s grown tremendously over the last five years. We have a Z06, we have BMW M3s, a whole lot of Mustangs. Every once in a while you get that little Fiat, or a WRX.

“Fortunately, we haven’t had any incidents. They all own a car that is $60K to $160K in value, and none of them want to go home and say, honey, I ran my car into the wall.

“That’s the thing that keeps those guys under control out there.” 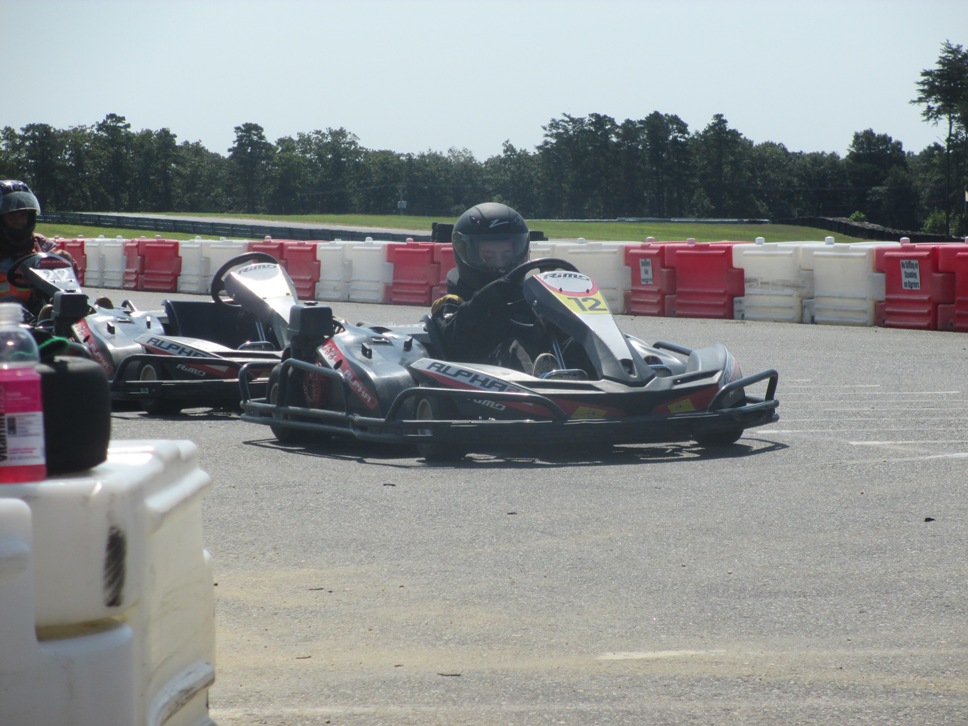 Go-karts at New Jersey Motorsports Park. Not a bad idea for a corporate event.

Marketing director Ashley Freas calls NJMP the “Premier Motorsports Entertainment Complex”, and it’s not just for spectators. If you get tired of only turning left at Pocono, you can bring your car to the road course here.

“One of the most common questions we get asked is ‘How do I get my car out on the track?’ Challengers, Chargers, I’ve seen all kinds of cars,” Freas says. “I’ve seen Honda Civics, I’ve seen Priuses. There are four on-track sessions throughout the day, and progressively, you build up speed and go faster and faster.”

If you enjoy it enough, you can become a Driver’s Club member…NJMP sets aside track days where only members can pilot their car through the road courses. Members say it’s a great way to entertain clients, and track days include a superb breakfast and lunch at the Finish Line Pub on the grounds. “Drink some water to stay hydrated, but no beer until after you’re done,” Freas says with a laugh.

But for those not yet of such means, the go-karts here are no slouch. They carry 9HP Honda engines and reach speeds of 55 MPH on either of two small road courses that even feature elevation changes. Like at Pocono, karts include transponders, and NJMP tracks your lap times, with the best time of the day written on a board inside the entrance.

Make a day of it, Freas says. “The road courses here always have activity, you can go go-karting but you can also watch unique and fun racing going on. You can eat at the restaurant, we have paintball so you can do that. We have a pool too, if you get hot and sweaty and want to relax.

“It’s like an amusement park. There’s something for everybody.” 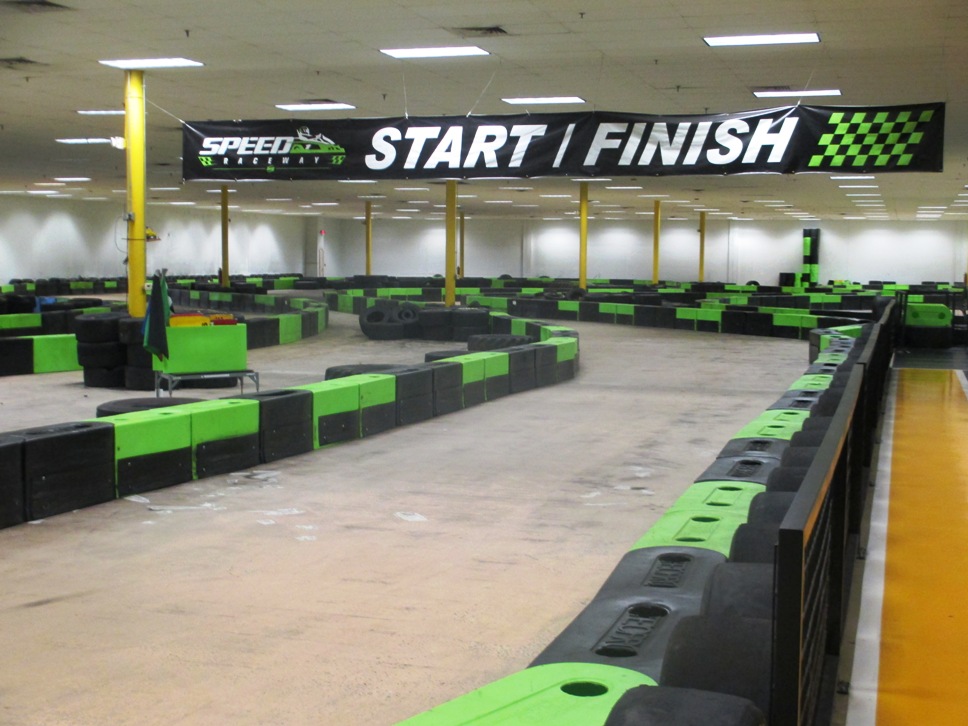 So you are probably thinking, this sounds great, but isn’t this October? Racing season is more or less over. Where can I host the holiday team-building racing event?

The Speed Raceway geniuses are way ahead of you. They saw the opportunities as electric cars emerged at the same time retail stores began to close in the wake of the Amazon explosion.

In the days before the electric go-karts that Speed Raceway uses, it probably would have been too noisy to run gas-powered karts indoors, to say nothing of the collective heart failure that the EPA would have had about the pollution. Electric karts are quiet and don’t cough up smoke, making them ideal to run indoors…which is, as Speed vice president Eric Armstrong points out, a huge advantage for them.

And electric karts don’t have to build up to speed, either.

“When you turn on your vacuum, it’s on full power. That’s very similar to our go-karts. They have a lot of torque and they go quick.”

The vice president isn’t exaggerating. When a driver is first let out onto one of the two Formula One style road courses, after donning a head sock and a helmet, the kart moves slowly. Once out on the track, as if someone flipped a switch, stepping on the accelerator suddenly whiplashes the occupant into a focused racer, picking up speed, braking through turns and hitting marks. Speed records lap times, but you won’t reach top speed in MPH terms. Not even Armstrong can tell you what the karts’ top speed is…meaning they’ll go as fast as you can handle.

“If you had an absolute perfect, flat surface, these could easily beat the cars on the highway. But in here, they can’t, because there’s not enough space and you’re turning all the time. You’re always zipping, but you’re never on a flat surface hitting high MPH marks.”

Speed has two locations, in Horsham, PA, and in Cinnaminson, NJ. The Cinnaminson location is located in a large strip mall on Route 130. It’s a marvel of progress for anyone old enough to remember the Clover store that occupied the space for many years.

“With so many retail establishments closing, there’s a lot of big buildings like this, and a go-kart facility like ours really fits,” explains Armstrong. “Five or six years ago, there was maybe ten facilities, now there’s easily 250-plus across the country.

“I guess we can thank Amazon,” he says with a chuckle.

The Speed Raceway experience is thrilling enough to draw occasional celebrities, even from as far as Baltimore. “Joe Flacco and his family come in here quite often. Especially with football players, people don’t recognize them because they wear helmets, until they put their names up on the scoreboard and they say, that is Joe Flacco right there!” 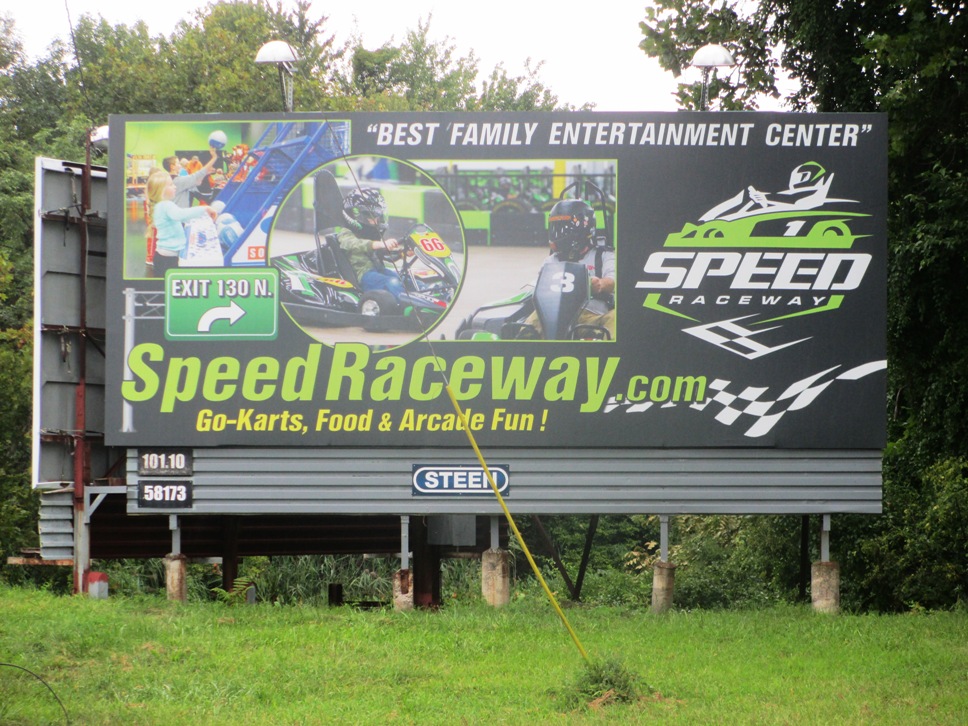 Sounds like a great place for your corporate awards ceremony.

Like the folks at New Jersey Motorsports Park and at Stock Car Racing Experience, Speed Raceway knows exactly how best to promote high speed, edge-of-seat racing for ordinary Joes…as a corporate team-building event, or for a bachelor (or bachelorette) party. At Speed, they’ve even built sound-proof conference centers, so the long-winded manager can spend just enough time thanking the team for the pizza to get cold…but the karts stay ready to run.

The exposure has helped Speed Raceway bring over a million racers through their doors in just over five years.

“It allows groups to blow off steam and do something unique,” Armstrong says.

“There’s really nothing like this as an amusement ride. If you compare it to a roller coaster, you sit in the car of the roller coaster, they strap you down and you hold on. Here, it’s similar, except you’re the one driving. You actually get to control the ride.”

If one of these racetracks starts selling Curley’s fries, they may just make the shore obsolete. 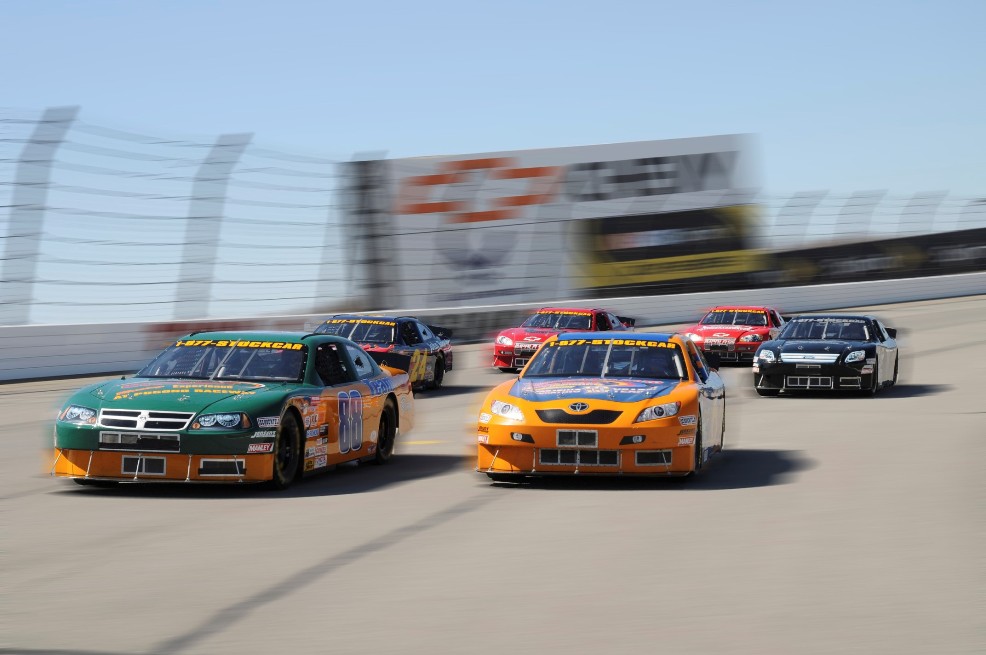 When your Chevy can make the Chevy billboard a blur, you’ve made it. (photo courtesy of Jesse Roverana)

The Mark of Excellence

If you’re a big time car guy and like going fast, you might even be able to lend a hand to the engine guys at General Motors.

As Jesse Roverana says, people bring all sorts of cars to race at Pocono Raceway. And some guys even act as techs for manufacturers. Roverana tells one story:

“We have a guy who’s all about Corvettes. Last summer he bought a new Z06. He brought it up, had problems, at 160 MPH it was shutting down and going into fault mode. He went through a lot of things with GM, and finally about a month ago they wired his car up so that the telemetry was going back to Detroit. He came out for another session, same thing happened, they received the telemetry, they made a change in the tune to the cars.

“I have a feeling that there may end up being a tune coming out that is gonna be mandatory across all 2017 Z06s, because he found the glitch in their system. It was General Motors trying to meet the EPA numbers for that car. They leaned it out a little too much on the tune for 170 MPH,” Roverana says with a chuckle.

“We don’t keep any speed records on the drive your own, I think the fastest that we’ve been told is the gentleman with the Corvette. He’s hit 172. You can go on YouTube and search for ‘drive your own Pocono Raceway’ and you’ll find this guy, Paul Stephens. You’ll find all those videos from the track pack of his Corvette.

“How many people are buying Z06s and going 170 MPH for any period of time? They’re not. But we offered that opportunity.”

Where’s The Love For Pocono Raceway?