When the Philadelphia Union were a relatively new Major League Soccer team, JerseyMan sent me to interview their then-CEO Nick Sakiewicz. I took some time to talk with members of their fan club too. Fun piece to write, and they gave me tickets and press passes! This article was featured in the August 2014 issue of JerseyMan. You can view the PDF of the magazine article here. 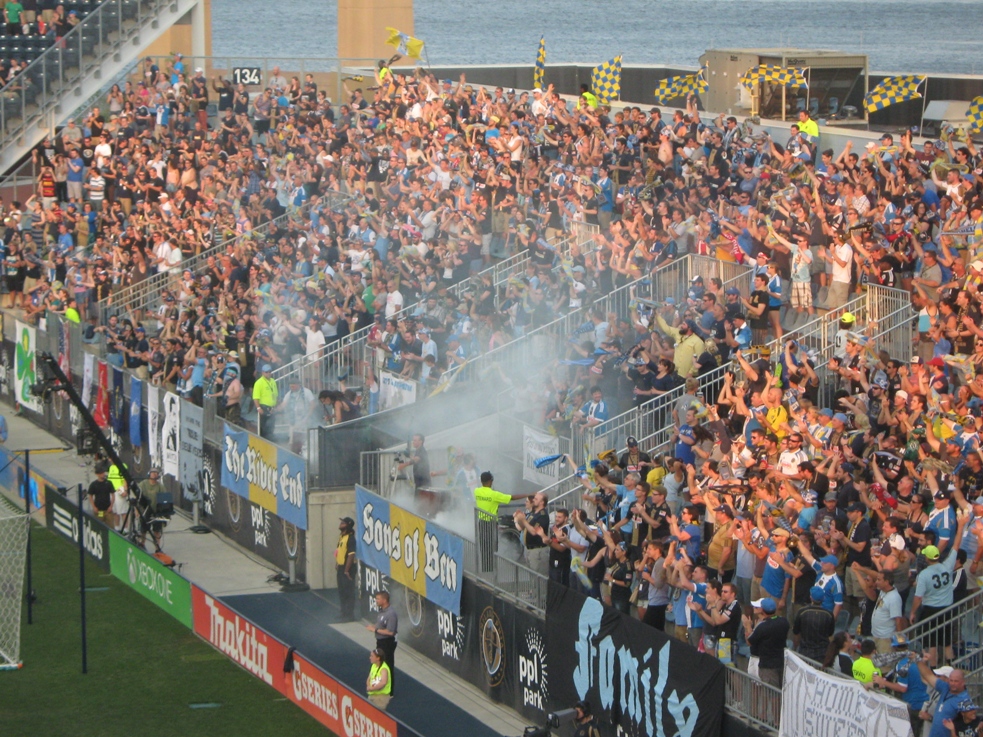 The Sons of Ben, at the River End of then-PPL Park.

In their fifth season, the Philadelphia Union have an established fan base, a fan club as dedicated as any in sports, a beautiful venue, and what appears to be a very bright future.

From the moment of the opening kickoff, the chanting begins.

A couple of thousand fans, in the aptly named River End section of PPL Park, are shouting and singing, with drums pounding continuously. Their energetic intonations change themes frequently, but they continue almost nonstop throughout the evening.

Their enthusiasm is palpable, giving the impression that the River End is unquestionably the place to be to enjoy a soccer match. The rest of the 18,000 here tonight are almost subdued by comparison, as if they are witnessing an entirely different event.

This isn’t to say the other fans are apathetic, of course…it is Philadelphia after all, and any sports team that performs well will be warmly received, as the Union players are when they launch three goals in the Colorado Rapids net.

But for anyone present at a Philadelphia Union game, it’s clear that it takes a special kind of fan to sit at the River End with the Sons of Ben. 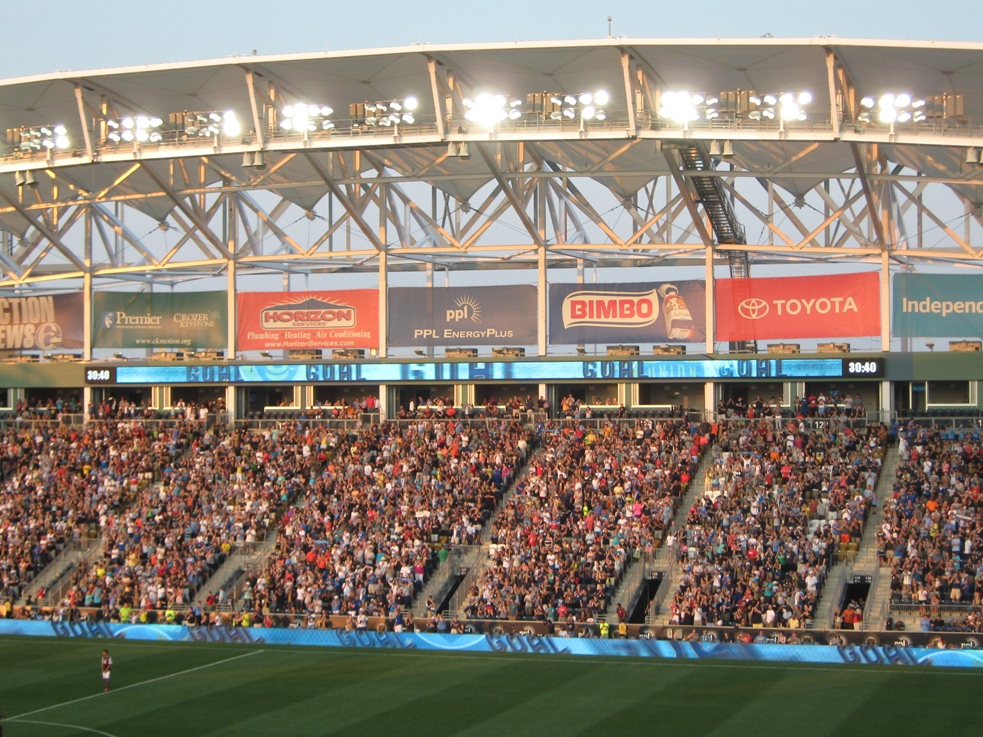 A capacity crowd at the Union match.

Despite a disappointing first half of the 2014 campaign, the Union are playing to 98% capacity crowds in their shiny new venue.

PPL Park, located in Chester, is an open-air facility designed exclusively for soccer. It is neatly planted along the Delaware River waterfront, with many of the seats affording a striking view of the Commodore Barry Bridge. With 18,500 seats, it’s large enough to feel major league, yet small enough that no seat is too far removed from the action. Fans in the furthest seats can admire the professional footwork of the players.

Philadelphia was near the top of the list of cities targeted for teams when Major League Soccer was founded in 1993. But the insufficient venue became a problem. Veterans Stadium, home of the ill-fated Atoms and Fury teams of the 1970s, caused MLS to look elsewhere at the time.

Current Union CEO Nick Sakiewicz, who was in on the founding meetings, tells the story:

“It was in an office in L.A., we had a whiteboard, and we were deciding which cities we were going to put teams in. Philly was in the top five. We’re starting a league, where do you need to be? L.A., New York, Philly, Chicago, Boston.

“The reason Philly never made it to the original ten was because of Veterans Stadium. It was a poor stadium, headed toward the wrecking ball, the Linc wasn’t coming anytime soon, and we had to start the league in 1996.

“We couldn’t come to a good solution where we felt the team would be hugely successful out of the gate, so we ended up going to D.C.

“The Metro Stars team that I managed, we played in Giants Stadium, 86,000 seats, we averaged 20,000 a game. Not even half full, lousy field, American football stripes, fans would come and say, ‘this isn’t serious.’”

So one of the nation’s biggest markets was not represented until MLS became popular enough to expand…into cities like Toronto, San Jose, Houston, and finally, Seattle and Philadelphia.

Once MLS began to expand, just in case they needed any encouragement to come to Philly, the Sons of Ben were there to help. 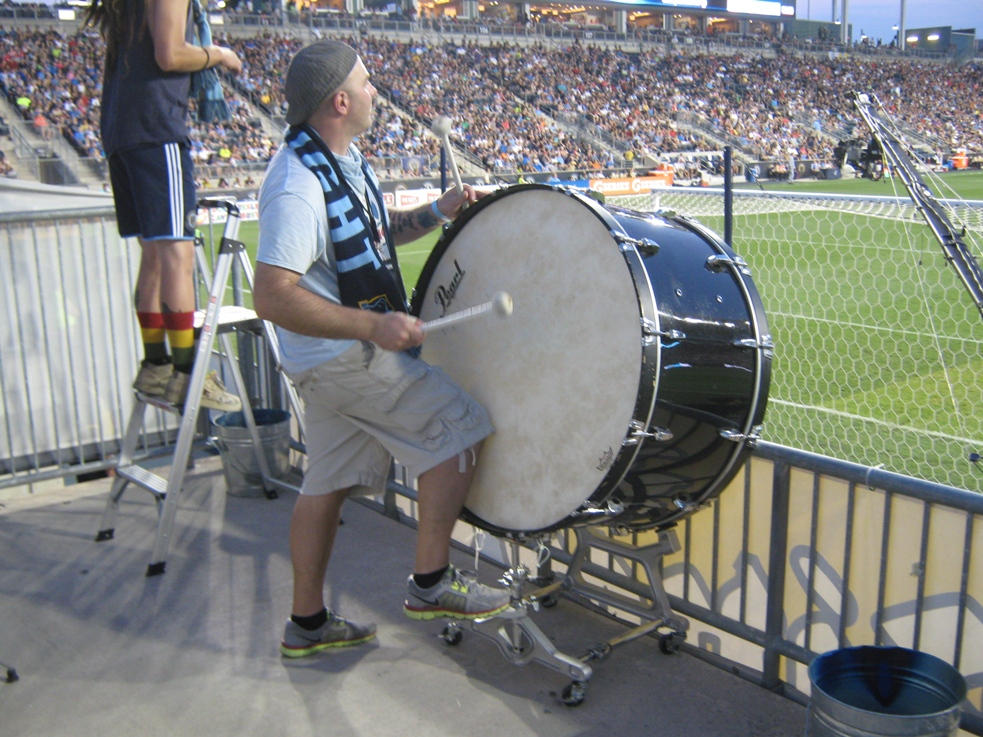 You know you’re a fan when you haul a big-ass bass drum to a match.

The Sons of Ben were founded by Bryan James and Andrew Dillon in 2007, solely for the purpose of bringing a major league soccer team to Philadelphia. They are named for Ben Franklin, arguably history’s most notable Philadelphian. As member Tim Sosar accurately puts it, “He helped found a nation, just as we helped found a soccer club.”

In a few short months, two tireless guys became over 650 fans toiling for the love of soccer and a city. They lobbied MLS for a team and local politicians for a venue. Scarves, flags and shirts bearing logos were designed, petitions attracted thousands of signatures, and pledges of season ticket sales were sent.

But the SoBs’ most notable statement came in their bus trips to matches in New York and D.C., where they sometimes numbered in the hundreds—and made their presence known as only Philly fans can.

Along with repeated chants of “Philadelphia!”, in New York they bleated at the Metro Stars: “We’ve won as many cups as you!” In D.C. for an MLS Cup Final, the SoBs bellowed “Buffalo Bills!” while sitting among fans of the frequent bridesmaid New England Revolution…a jeer that resulted in projectiles being thrown at them by enraged Revolution fans. 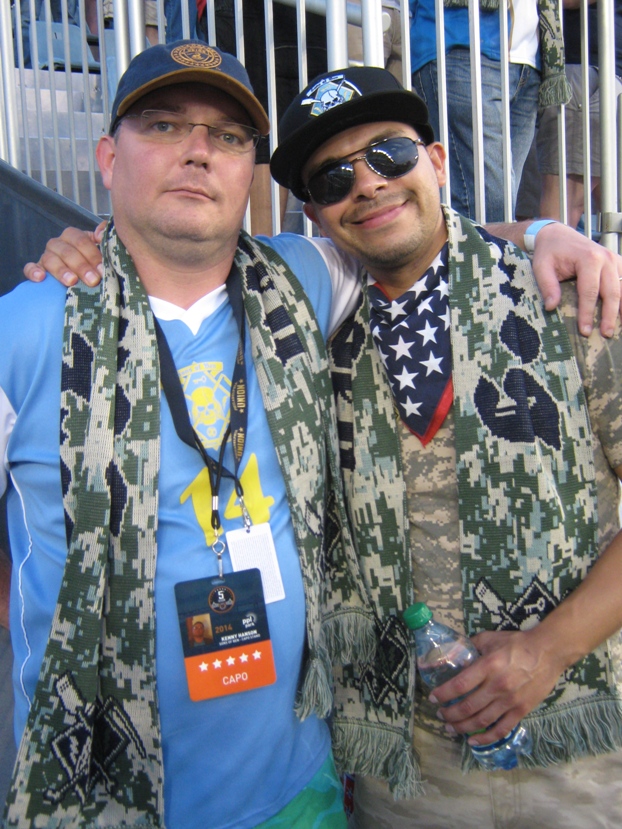 Kenny Hanson (left), the then-president of the Sons of Ben.

Kenny Hanson, current president of the Sons of Ben, is unequivocal. “The Union is here because of the Sons of Ben. Otherwise there would not be a team here.” Sakiewicz doesn’t disagree, calling their contribution “massive”.

“They were influential in our logo design, their colors, the snake that’s in our logo is from that focus group. And how the culture emerged. The DNA of the Sons of Ben is in the DNA of the Union.”

Indeed, Sakiewicz—a proud, dues-paying member himself—was so impressed with the fervor of the SoBs that he offered to buy them a beer for their effort when the team’s arrival was announced. It cost a bit more than he expected. 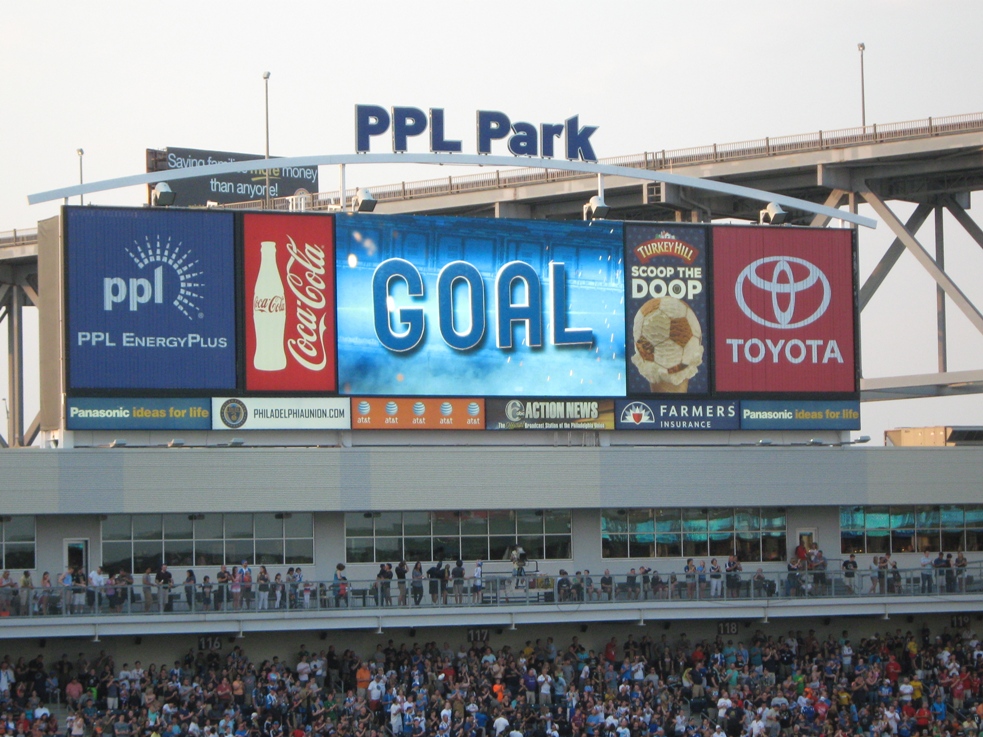 Be sure to say it with fifty “O”s.

Half a decade later, the Sons of Ben are now over 5,000 strong, and with the near sellouts at PPL Park, it would be hard for Philadelphia area natives to argue that American soccer…finally…is picking up steam.

Sakiewicz credits social media and generational bonding for the surge. And the USA’s performance in the World Cup helped.

“We used to have books to go to, the Millennials have this (holding smartphone). On this you can follow every league in the world, every player in the world.

“Did you see the heat map of Twitter? When Christiano Ronaldo scored the second goal for Portugal, which pretty much iced it for us, Twitter did this heat map, the whole country just lit up red. Great graphic on ESPN.

“On top of this, millions of them have been playing the game the last 30 years. The 80s kids are Sons of Ben members, and they aren’t kids anymore. They’re money making, money spending professionals who are having kids. The pipeline of soccer fans is beginning to age and come through generationally. Add into that foreign expats…big Spanish speaking foreign expats. Guess what their parents played and loved? Soccer.

“So now it’s an American sport. In Brazil right now, the largest percentage of tourists are Americans. Nearly 200,000. Biggest single nation that is visiting Brazil for the World Cup.”

Sakiewicz and the Union don’t plan to rest on their considerable success at the gate. PPL Park was built to expand, and they will when the time is right, he says. But the first matter on the front office minds is turning the Union into a title contender, starting with finding a team manager.

“I’m sitting on over 200 resumes from around the world,” Sakiewicz notes. “There are some big names interested in coaching this team. Which is frankly very surprising to me, and maybe it shouldn’t be. With the exposure the league’s getting, games are more prevalent in Europe and South America. They see the quality of the league, what’s going on, the World Cup with America doing so well.

“Anyone who’s been in this for 30 years, like I have, shouldn’t be saying, ‘Well, how did we get so good?’ 20 years of MLS, brick by brick by brick. And bang, all of a sudden Tim Howard’s on Good Morning America.” 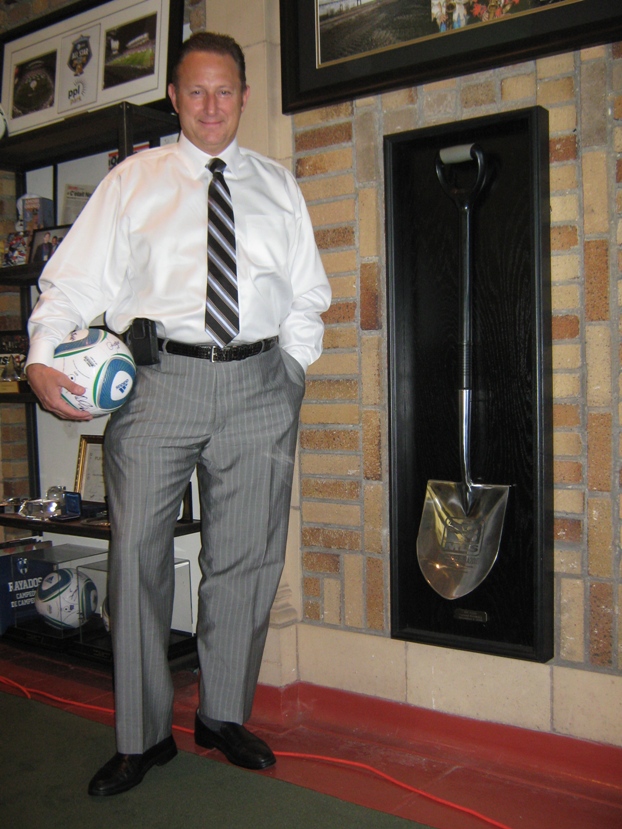 Nick Sakiewicz, the proud CEO of the Philadelphia Union, in 2014.

A native of Passaic, Sakiewicz is most proud of those around him who have been a part of this thriving sports enterprise in the City of Brotherly Love.

“If all of this went away, and I was down to my American Express card and me, give me the same people and we’ll do it all over again. I’ve managed three other clubs, launched the league with the founding executives, and that was all fun. But what this project has been about is much more near and dear to my heart, because first of all I own a piece of it, which helps. But also, I fell in love with this area and the city of Philadelphia and the people.”

Sakiewicz adds an apparent contradiction that he is confident every Philly fan will understand.

“It’s a passionate place. I’m not throwing stones at New York, but I get it now. I’m a Philadelphia guy. It’s a really great place to operate—if you know how to be a Philadelphian.”

A skill that anyone can learn, should they need help, from the Sons of Ben.

Note from Kurt: Kenny Hanson, the president of the Sons of Ben at the time of this article, sadly passed away in 2017. You can read this article about the reaction to the tragedy. It was a great pleasure to meet with Kenny and speak with him. He was a funny guy. R.I.P. Kenny.

Posted in JerseyMan, PhillyMan, Sports | Comments Off on Sons of Philly – The Philadelphia Union