I met Steve Trevelise many years ago at a bar, and years later he featured me on his NJ 101.5 show to talk ballparks. He represents the good side of Jersey.

I interviewed him for the Spring 2018 issue of JerseyMan; you can read the article on their website here or view the magazine article here. 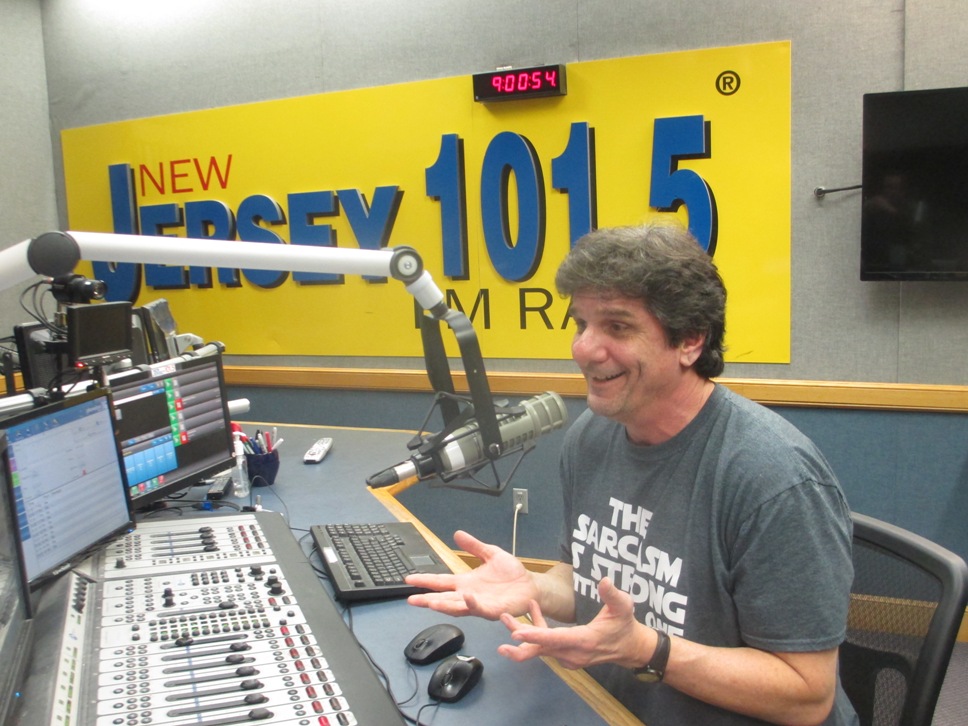 Steve Trevelise, on the station that belongs to NJ.

Proud To Be New Jersey

Union City man Steve Trevelise’s Jersey accent has been heard by New Jersey and Philadelphia residents for many years. And he has no desire to be anywhere else.

Trev then spends four hours jabbering “about things that drive me crazy”, with equally passionate Garden State natives on the phone lines. Fortunately there’s no shortage of topics. Our politicians alone are a bottomless source of insanity.

At week’s end, the seasoned veteran of the airwaves crosses the Delaware and pulls an overnight at WIP, talking Philly sports from 2:00-5:00 AM each Saturday. From the perspective of a Giants fan. Somehow, he manages to emerge from the studio free of visible blood stains.

Growing up in New Jersey has a way of preparing people for uncomfortable situations. As a Union City native, Steve Trevelise knows timidity doesn’t fly here. But it’s the rare caller to his show that hangs up seething. Trevelise is a genuinely nice guy, who articulates his opinion in a thoughtful way.

Say for example, his take on the NFL anthem controversy.

“The whole protest was ill-conceived. It was a bad idea. If you look at the greatest civil rights marches, Martin Luther King, the march on Washington, it’s all about the cause. By taking a knee for the national anthem, the players confuse the issue. Now they spend more time explaining: ‘We’re not disrespecting the military.’

“If they had said, ‘in every NFL city on Saturday night, we’re gonna hold a rally. We’re gonna have celebrities go on, have players talk about the cause, we’re gonna sell tickets for 50 bucks. We’re gonna take that money and put it into a pool, and then for every case of police brutality or racial inequality you bring to us, that we examine and see that this is real, we will use that money to fight for you.’

“Now you’ve done something, and it’s away from the game. As opposed to football players taking a knee…it is disrespectful, and that’s where it gets lost.”

After Trev tells you what he thinks, call in and have at it with him…without fear of typical ratings-driven condescension.

Ideology aside, the lifelong Giants fan is happy for the long-suffering Eagles faithful.

“I have a relationship with Eagles fans unlike any other Giants fan, because I talk to them every week. For years I’ve been hearing the anxiety in their voices, the frustration of the waiting. I sincerely congratulate them, especially when it’s so easy to root for this team with all their back stories.

“Of course next year, the rivalry picks up where it left off.”

As Jersey as Steve Trevelise is, he’s anything but the rude, surly stereotype. But he understands why we all get a little aggravated sometimes. He did spend years reading the traffic reports. 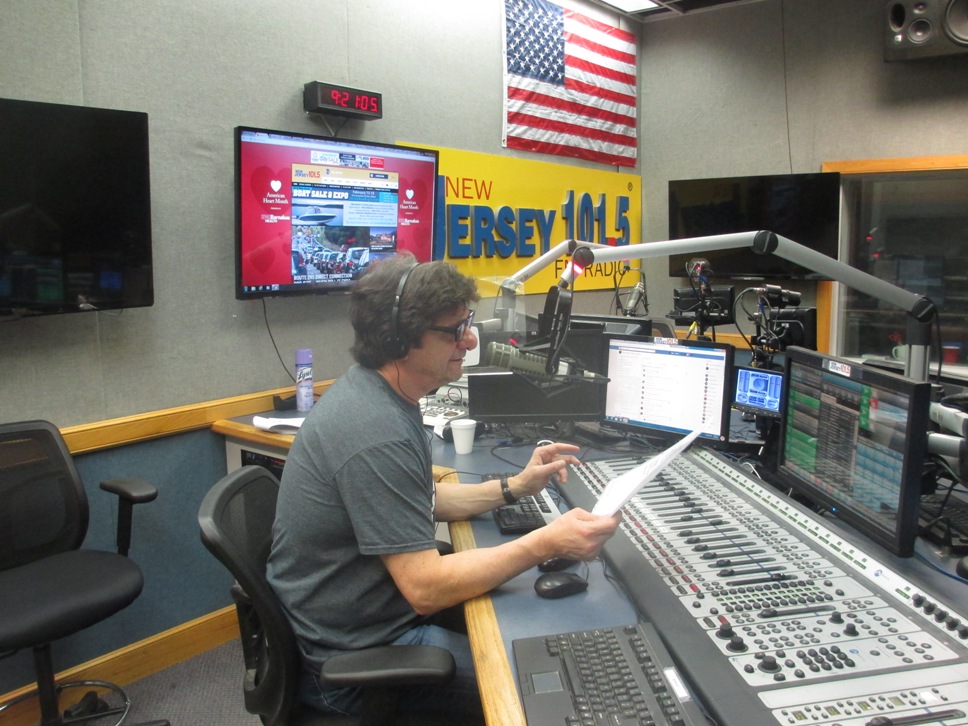 Most memorably, he was a reporter on the Howard Stern Show on WYSP, as Stern directed nonstop scorched-earth vitriol at WMMR morning rival John DeBella. You may remember the stark contrast of Trevelise’s friendly tone, smoothly delivering sports updates following thunderous segments of Stern ferocity. He might have been the perfect announcer to interrupt the War of The Worlds broadcast.

Trevelise describes his WYSP years as being a “local presence” for a New York-based show. He remembers initial resistance to bringing Stern to Philly…not because of the daily controversy, but out of concern that Howard was too New York for Philadelphia.

He recalls how Stern turned that into an advantage: he appealed to our city’s love of a street fighting underdog.

“What made Howard work in Philadelphia, was getting Howard to talk about Philadelphia. It wasn’t ‘eh, Philadelphia, second class citizens’. He found a tool to make Philadelphia work. That tool was The Zookeeper, ‘we are at war with the Zookeeper’. Philly could buy into that. And then it became, ‘how’s he going to torture DeBella today?’

“What’s funny about it is, eventually DeBella comes to work at WYSP!”

Trevelise has been a fan of Stern since the WNBC years. “The great thing about Howard was that he was so controversial, but he was entertaining, and he’s real. I got paid to listen to the Howard Stern show. Something would happen during the day, and it’d be like, ‘I can’t wait to go to work tomorrow and see what Howard’s gonna say about this.’

“And I love when I’m on the radio at night, and something will happen and I’ll be talking about it, and people go, ‘I couldn’t wait to hear what you had to say about this!’” 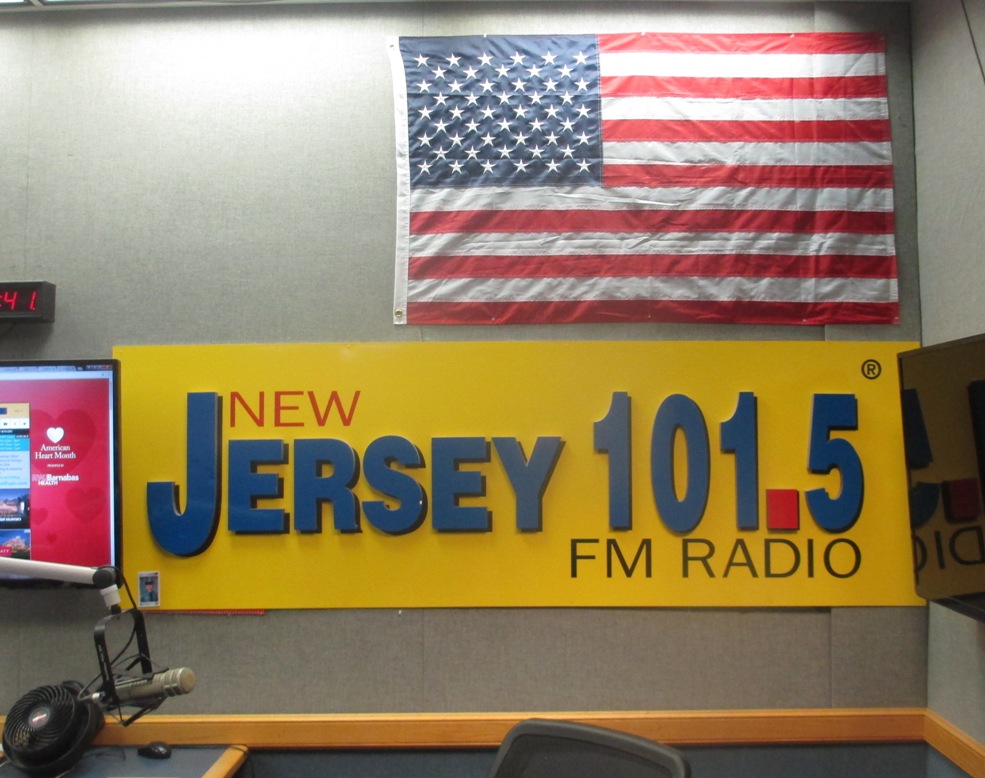 In an era of satellite radio and syndicated stars, radio is still local. It’s more than just traffic and weather, but as it turns out, that’s a pretty big part of it.

As a former director for Shadow Traffic and later Clear Channel traffic for Philly stations, Trevelise never ran out of work. But since those days, things have gotten pretty congested in the Jersey suburbs, too. After decades of migration from New York and Philadelphia, there’s now a need for an entire state to have its own traffic problems accounted for.

“I remember from giving traffic reports in the old days, New Jersey was always the afterthought. Philadelphia traffic, here’s all the roads in Delaware County, then New Jersey: 42, Turnpike, there you go. Here’s all the New York roads, then New Jersey: Turnpike, Parkway, and we’d go off. Every 15 minutes, you can turn on New Jersey 101.5 and you’re going to get the traffic report for exactly where you are. I-287, Route 9, Route 35, the Parkway, whatever.”

But daily traffic info is nothing compared to a Jersey-centric station’s impact in a storm that devastated our famous coastline.

“Hurricane Sandy galvanized 101.5 with listeners. I’ve never in my life, including during the Stern show, seen anything like it. I was on the air the night Sandy happened, and I remember Christie came in for ‘Ask The Governor’. They were telling him don’t come in, and he said no, this is the place where I can reach everybody. Because everybody was listening.

“Christie comes in at 7:00, I follow him at eight and I was supposed to be there until midnight. Ray Rossi was there at the time, he was gonna follow me. At about ten or eleven, we lose the transmitter. So now we had nothing but the Internet, and we have to stay on because we’re online. At 3:00, we lose the phones. Ray and I are talking recipes for tomato sauce. We literally had nothing. But people are continuing to call in, because they’re getting us.

“For the next three or four months, we had people with no power, literally listening to us with batteries in the radio. Imagine, in 2012, you’re a radio station and you’re the only game in town. There’s no television, there’s no Internet, there is nothing else but you.

“To this day people thank me. They say hey man, thank you for getting me through Sandy. They still remember.” 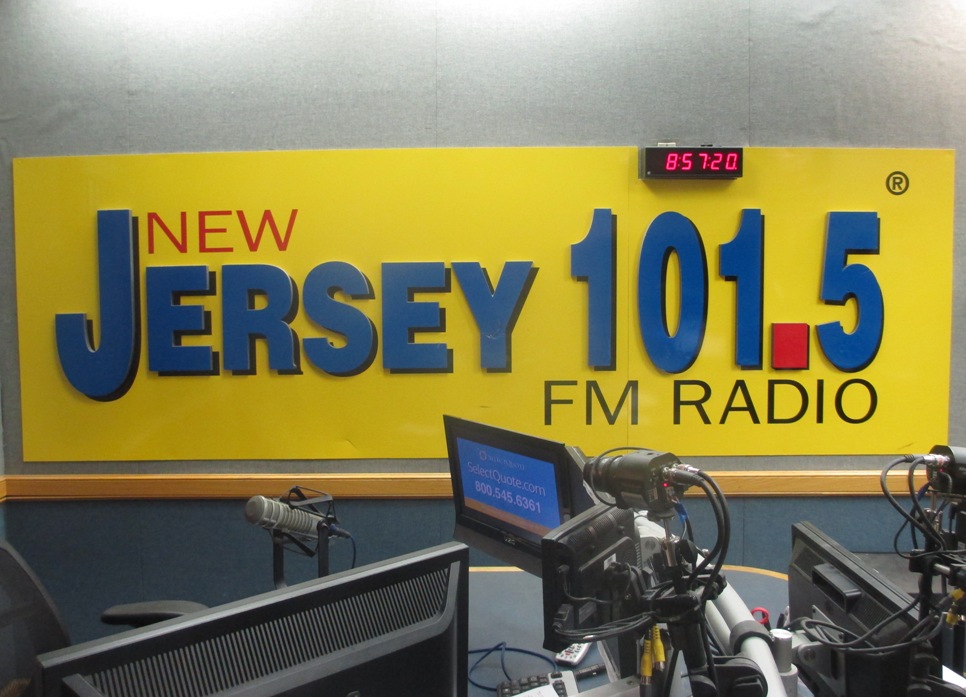 Not New York. Not Philadelphia.

People tune in to NJ 101.5 for traffic and weather. They stick around for ball-busting camaraderie with Jersey lifers like Steve Trevelise. To him, it’s a communal thing.

“We’re the only radio station that, when you turn us on, you’re hearing people talking the way you do, talking about things that you care about, in the state that you live in. This is ours, it’s not New York, it’s not Philadelphia.

“101.5 is New Jersey. I am New Jersey. I was born in Union City, I’ve lived all over the state, I would never move. I genuinely love it here. There is a realism, an honesty about New Jersey, and that’s what I bring to my show.

“If someone said to me, what do you want to do, I couldn’t write this better. I’m proud that I get to talk about a place that I love, in front of children who I love. And that they get to see it.”

The Comedy Stylings of Steve Trevelise

In addition to his radio career, Trevelise has dabbled in comedy, performing as an opening act for the likes of Robert Klein, Pat Cooper and Bill Hicks.

Trevelise became successful enough in the comedy world to open two of his own comedy clubs. The Coffee-Dot-Comedy Club in Sea Isle City was a success…it featured dishes named after radio stars and $1 a minute Internet service in the days before wi-fi. Later he took over the comedy club in the Cherry Hill Crowne Plaza, Rascals, and renamed it Sarcasm.

It was successful for about five years, but as Trevelise says, it’s tough when you’re living on the door. “I went through something like seven general managers in five years. I got guys sending fruit baskets to the comics, I got guys trying to charge me rent,” he says with a chuckle.

But he’s still doing standup comedy events, and now he brings his radio friends along. “I’ll go out and put shows together and do like corporate fundraising, as well as doing road shows. I take Dennis and Judi out on the road, and also Bill Spadea, and so the 101.5 guys are all able to entertain people, which is great.”

If you’d like to Steve and his gang of NJ 101.5 radio costars at an event, you can check Trevelise’s page on the radio station’s website.

Or you can friend him on Facebook for updates…he readily accepts most friend requests, but you have to catch him when he’s sitting at 4,999.