The Life of A Jockey – Jose Ferrer

The Life of A Jockey – Jose Ferrer

Being a jockey is tough work. You have to stay in shape, find work where you can, and win enough to keep getting hired. JerseyMan sent me to interview Jose Ferrer, who spent the day riding a couple of horses to victory at Monmouth Park. You can read the PDF of the article here. 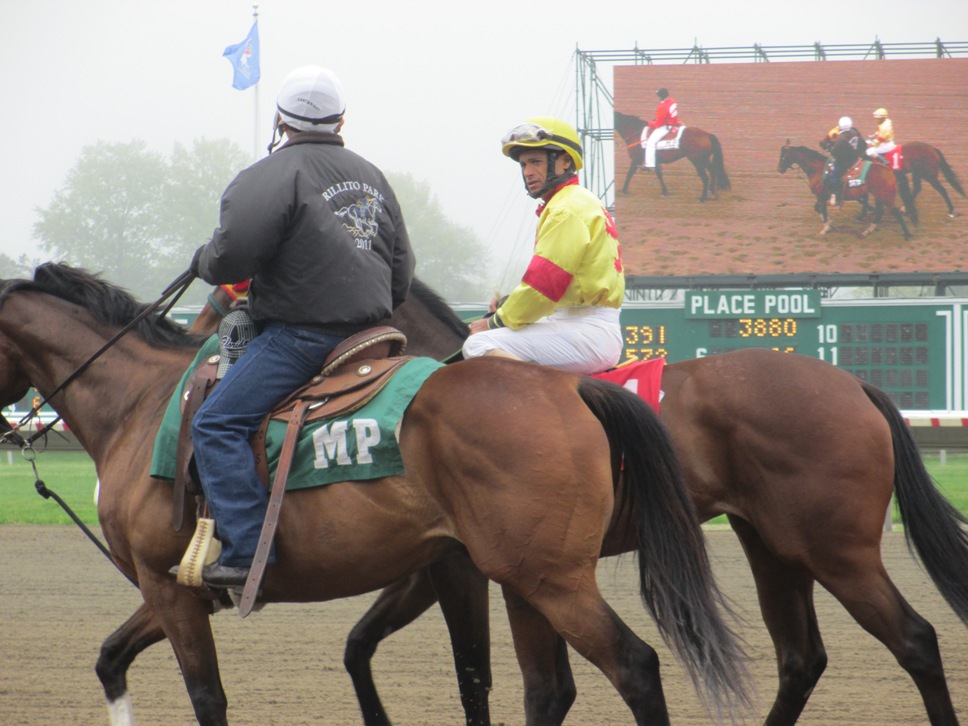 Jockey Jose Ferrer, on Fiesta Rose shortly before a win.

A day in the life of a jockey.

It is cloudy, almost foggy, and unseasonably cool for May. But the chill is of no consequence to those in attendance. When it comes to Jersey weather, “unseasonably” is an adjective that most residents laugh at anyway, and so turnout is still high.

The picnic areas of the venerable venue are full of dining patrons awaiting the next race. Some have brought sandwiches, others partake of pizza or hot dogs at the concession stands. The odor of charcoal wafts from the private party areas. It’s mostly adults in attendance, but there are a few kids, who spend the day looking for ways to amuse themselves.

The infield scoreboard shows a replay of the tight matchup in the previous race, where Mello Groove edged Greed Is Good in a photo finish. Tractors smooth out the track for the next race. A truck pulls the gate along the surface to the starting line.

For the third event, jockey Jose Ferrer, who rode Greed Is Good previously, mounts Fiesta Rose, a three-year-old 9-5 shot. Periodically the announcer reminds the audience how much time they have left to place a wager. Finally after growing anticipation, especially for those with a financial interest in the outcome, the bell rings and eight very large animals begin sprinting out of the gate.

Fiesta Rose starts on the inside of the track and takes an early lead of about a length, which lasts until they turn into the far corner. Halfway through the race, the lead over The Slipper Fits becomes two and a half lengths, with Fiesta Rose gradually building on the lead.

As they round the final turn, it’s clear that this race will be no contest. Over the last hundred yards, Ferrer and his faithful steed have pulled away from the field. Ferrer methodically and rhythmically cracks the whip the rest of the way, just enough to keep the galloping animal honest.

It’s an easy win for Ferrer, and he rides to the winner’s circle with the confident smile of a man who’s been there before. He tosses the whip to a fan with a satisfied flair, raises his arm in triumph, and hops off of Fiesta Rose. He pats his mount affectionately, and starts back to prepare for the next race of the 12-race card. Along the way, he pauses to shake hands with some happy and newly richer fans and to pose for photos with his family.

Ferrer will race several more times on this Opening Day, including piloting a 13-1 shot named Light’s Gone Wild to another nearly uncontested victory in the sixth event. Like with any great athletic feat, the best make it look so easy. 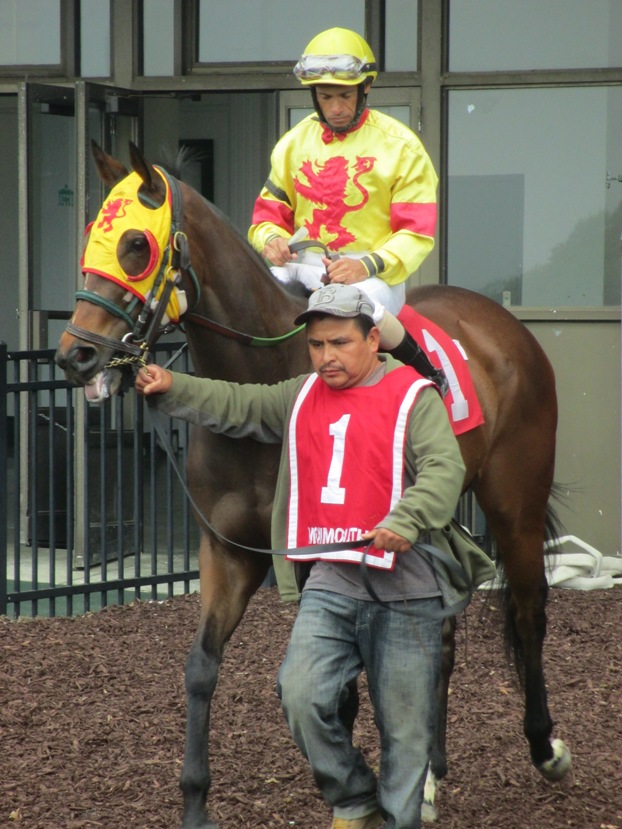 On Fiesta Rose pre-race: “You have to have the horse.”

He speaks from experience, this veteran who has been riding horses now for 32 years. With an uncle and four cousins as riders in his family, the occupation is in his blood, and more importantly, he respects the challenge of making a living at it. Like the folks who wait in line to wager on the event, jockeys are rewarded for the horse’s finish. But the jockey has to work harder for it.

“It’s not easy, like people think. Some riders make a pretty good living, but you’ve got to get lucky. We get paid by mount, by horse. We don’t sign a contract, so we’ve gotta go there and compete against everybody. You’ve got to compete, you’ve gotta beat them. You do everything you can to bring the horse to the winner’s circle.”

Ferrer frequently compares the jockey’s life to that of other athletes. Like in other sports, the competition is fierce, the effort can be dangerous, and the best performers seem to have a natural gift.

But being a jockey has its own unique challenges, too. If you sometimes yearn for the blue collar days of athletes past, when even the best supported their families with championship bonuses, listen to Ferrer discuss the jockey’s world:

“If the card has twelve races, you could run twelve races, or you could run one, or two. It all depends on how much business you’ve got. We used to race like five or six days a week, now we race only three days a week. There are a lot of places, Parx, National, that on days off…we call Monday through Thursday days off…you can go ride over there.

“We don’t have a contract or anything; we’re like painters or plumbers. And it’s like any kind of business, if you get a good reputation, you do a pretty good job or whatever, people will call you. The more races you win, the more they want you. It’s about performance, how you perform out there. Any kind of thing could put you on the bench.

“But it’s a cool job, you get to meet a lot of people, it’s great to be on a big horse, it’s a big high, you know. It’s like hitting home runs, to see that you came first, your horse performed great. And if people win money, they’re happy with you, if they don’t they’ll boo you and call you names,” Ferrer says with a chuckle. 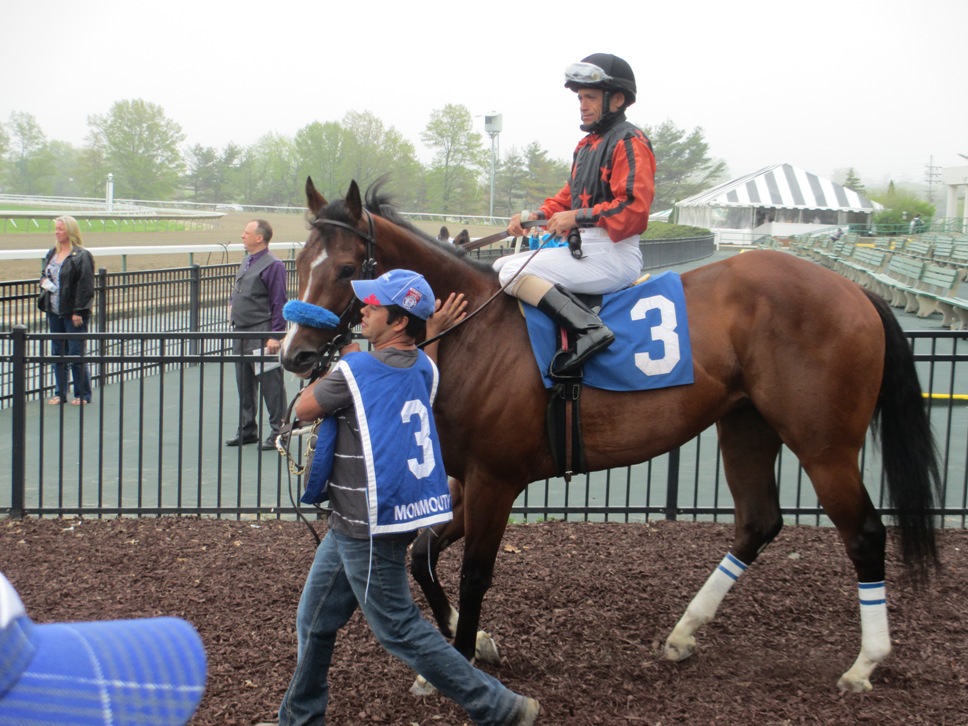 Ferrer on Light’s Gone Wild, another horse he would soon ride to a win.

Asked what makes a jockey skilled enough to be in such demand, Ferrer credits experience and preparation.

“Before the race you’ve got to study the horse. I try to have a good idea what’s gonna happen that race, and then figure out what our position is going to be. There’s a lot of things going on out there. You’ve got to feel the pace. If the horse comes from behind, you lay off. Some horses like to come from last, they break out of the gate and sit back, get comfortable gaining their strength, and then make a move. A lot of horses don’t like to be inside. So you break out of the gate, try to go through and work yourself out, and use the outside.

“I’ve been doing this for 30-something years, they might look the same, but they’re not. That’s why you go in the morning, that’s what we do in the morning, try to learn how this horse performs, how they like to run.”

It sounds simple in theory, but the execution takes skill and strength.

“You’re on top of a 1,500 pound animal, no brakes or nothing, just reins to hold him back from going forward. Anything can happen out there, they could do anything, stop, go here, jump.

“You have to be in top shape, absolutely. Because when you’re on the horse, you’re pretty much on your toes for that minute and a half, almost two minutes. You’ve got to have great balance, your knees have to be strong.”

“You go down, anything could happen, you could break your neck, break all kinds of bones. If you get hurt at the track, they’ll pay you for being in the hospital, but when you come out, you’re on your own. It’s just one of the downfalls. I’ve gone down and had injuries, nothing bad.” 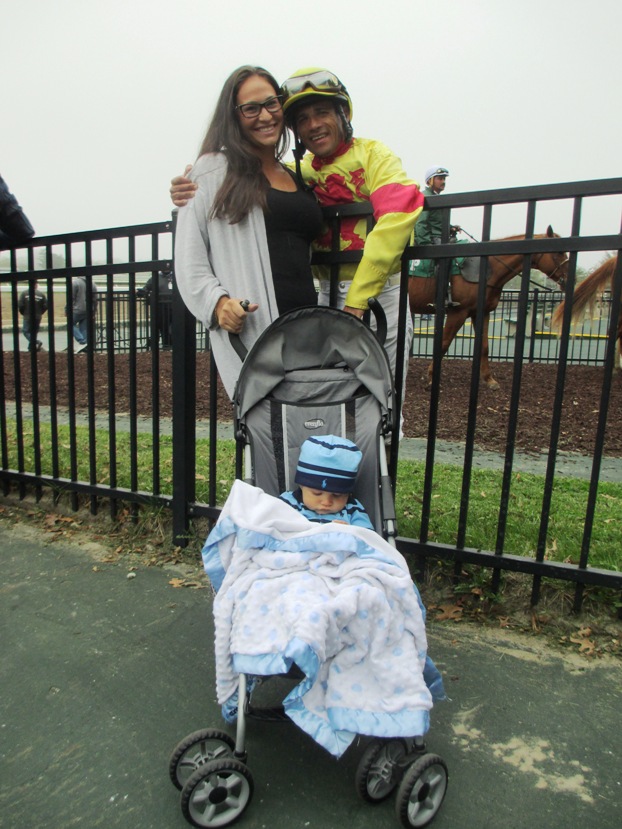 Celebrating a victory with the family.

While the job of riding fast horses is unquestionably as physically demanding as any athletic endeavor, the veteran Ferrer says that his profession does have one edge that keeps them going at it longer than most…that their results still depend on the abilities of the four-legged animal beneath them.

“Baseball player, 40 years old, you’re old. Football player, really old, because you’re depending on your body. But being a jockey, it’s 85% horse, so I’m thinking if I stay fit, I could ride wherever I want. If you’re still fit, you can do it for a long time.

“The challenge for riders when they get old is the weight, they don’t want to lose the weight and keep it down, and the older you get the heavier you get. Now that I’m a little bit older, I try to be in the best shape I can be. I lift a lot, I run a lot, and I do a lot of weights. I like to be strong.

“Why do players hit home runs? It’s a gift that God gave you. It’s about using that gift, some guys, they don’t use it.

“I’m proud of doing it for so long, staying consistent. You want to win big races, you want to win the Derby. But if you don’t have a chance, you move on. You keep doing what you’re doing. The man upstairs gave me a great family, a beautiful wife, that’s very important to me.”

And Ferrer already has career plans for his young son.

“I hope he’ll be a jockey or a baseball player. I love baseball.” 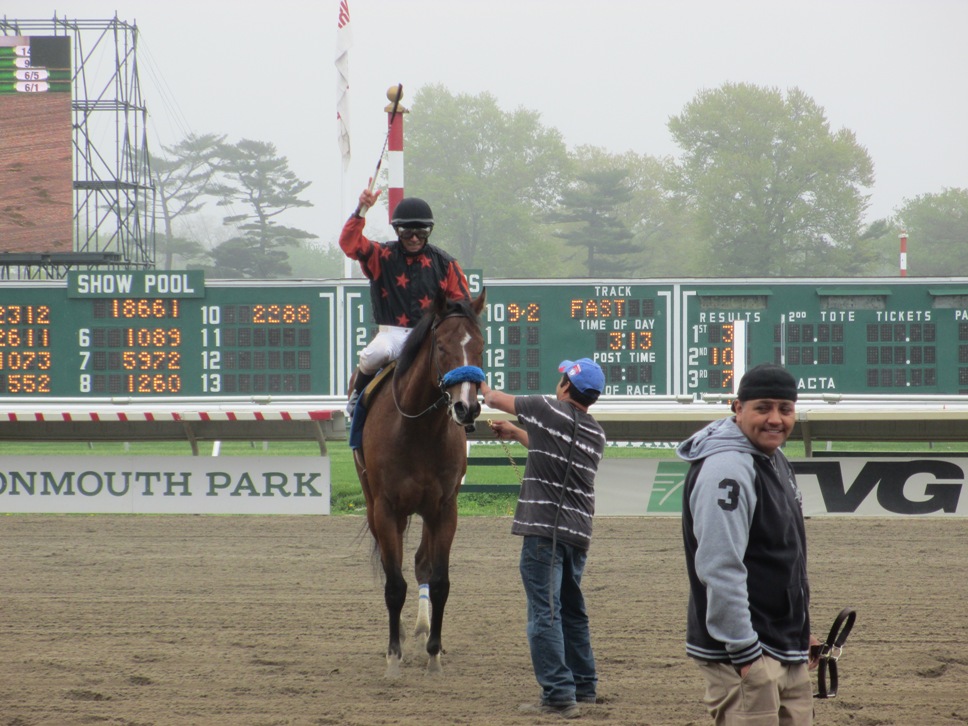 This jockey’s a pretty good bet.

The Curse of The UPS Car

Posted in JerseyMan, PhillyMan, Sports | Comments Off on The Life of A Jockey – Jose Ferrer